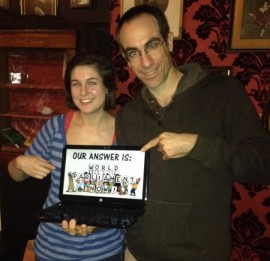 An interesting discussion last night about the idea of a world parliament.  If democracy is a fundamental principle of how government should take decisions, which this website thinks it is, and if government decisions are now effectively being taken at the global level, which is an observable fact, then democracy too needs to be practised at the global level.

One of the most obvious and immediate ways to create democracy at the global level would be to set up some kind of world parliament or global parliamentary assembly.  (Read more about the idea of that here.)  There’s a lot of detail to be resolved in that idea, of course, but the basic principle of taking the system of representative democracy we are used to within individual countries and implementing it within the United Nations and other global institutions.

The focus of our discussion was whether this would actually lead to something that looked like global democracy.  Global, yes; but democracy?

There is a lot of doubt expressed about the effectiveness of representative democracy as we know it now.  Participants from groups such as the Spanish 15-M and Occupy reported on their experience of how representative democracy had let them down: decisions were be taken in the interests of the rich and connected, even though everyone in theory each had one vote.  Direct popular participation was a much better way for people to have their voices heard.

There was a separate concern about the remoteness of any global parliament.  If each global MP represented, say, 10 million people, what kind of representation could that be?  The rise of the internet as a means of interaction meant that citizens could engage directly in decision-making rather than having to go through intermediaries.  Borders are no problem, when it comes to the online world.

Both of these points are good and serious, but I am not sure that they are criticisms of representative democracy as such: they are challenges to the way in which it works, not whether it works.

On the first point, the crucial point about government is that it is compulsory.  There is something qualitatively different between the power of the state and the power of other kinds of institutions.  The attempts to set up self-managing direct democracy are not in themselves expressions of state power, in which case that state power remains to be controlled.  The desire for self-management is evidence that representative democracy is currently failing, largely because it is still too centralised, not that it must inevitable fail.

Think of it in these terms.  One of the major issues to be dealt with by the global system, in whatever form it exists, is the need to cut carbon emissions and reduce global warming.  The problem is not caused only by what communities do, but by what other communities do to them.  No amount of self-management can tackle this fundamental dilemma.

On the second point, that of the distance of parliamentarians from the public, it is undoubtedly the case that people elected to a legislative assembly of any kind will have a certain distance from the people who vote for them, but they will be equally distant from all of them.  That is to say, all voters remain equal.  A system that allowed, for which read required, voters to engage in the decision-making process on a more frequent basis would discriminate against those who were less able to do so: the parents of small children, for example, or the elderly who cannot use the internet.  Such people are equal citizens with equal rights but who will never have equal access to decision-making on a frequent basis.

Now, neither of these responses to the two points is completely satisfactory.  Simply repeating the experience of Westminster at the global level would not achieve much.  But an effort in this direction is nevertheless worthwhile, and we need to think and work more on how.