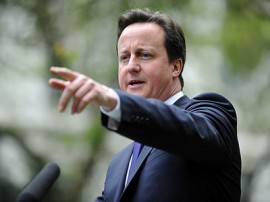 The speech by Conservative leader David Cameron yesterday dropped the previous commitment to a referendum on the Lisbon treaty and replaced it with six pledges that he aims to achieve in the course of the next parliament. (Read the speech here.) Arch-opponents of the EU like Daniel Hannan and Roger Helmer have protested about the end of the referendum commitment, but David Cameron has recognised that the only thing a referendum on Lisbon could do would be to drive Britain to the margins of Europe: it wouldn’t actually get the Lisbon treaty changed.

His six pledges are divided into three that Britain can do on its own and three for which it needs the agreement of the other member states. The first three are:

1. A law to ensure that any future pooling of sovereignty within the EU, such as a new treaty or joining the euro, is approved by a referendum. Referendums have increasingly become the norm for constitutional matters in the UK – think of the votes on devolution to Scotland, Wales, Northern Ireland, London and the north east of England, or the promised votes on the euro or the constitutional treaty – so it is hard, on a specifically European basis, to object to this. It is wrong, though, to picture this as a criticism of the EU: no, it is a criticism of the unwritten British constitution. (And theorists of representative democracy might have something to say, along with people concerned about the influence wielded by a biased, unfair media.)

2. A law to ensure that any use of the passerelle clauses in the Lisbon treaty, which replace the voting method of unanimity with QMV in certain policy areas, has to be approved by primary legislation, rather than a simple parliamentary vote. Again, this is a reflection, and a rather damning one, on British parliamentary procedure. So much for the esteem in which Westminster was once held.

3. A law to assert that, in the last resort, the British parliament remains sovereign. We are told that the German constitutional court has already ruled something similar in Germany. The fact that, in Germany, a court has decided this tells us a lot. The court was ruling on the Lisbon treaty and whether it was compatible with the German constitution, and the answer was that it was. The point about where ultimate sovereignty lies arises from an examination of the Lisbon treaty, and the conclusion reached in Germany could be reached here already. (If the German court had reached a different conclusion, it might have had words to say about the Lisbon treaty as a result.) For a law to be passed in the UK to confirm what the German court has already identified would be about as meaningful as passing a law to confirm that London is the capital of the UK. Some people might find comfort in such a law, but it would merely state something that is already an objective fact.

(There is a school of thought that interprets Mr Cameron’s rather vague remarks on this point as meaning that UK law should become superior to EU law. If that is really what is meant, that would be tantamount to passing a law for Britain to leave the European Union, and that would surely be in profound contradiction with point 1 above.)

4. An opt-out from the Charter of Fundamental Rights. It is already the case in the Lisbon treaty that the Charter cannot be used in the UK domestic courts, but that does not mean that judgments on cases arising in other member states that rely on the Charter cannot be applied as law in the UK too. I suppose that Mr Cameron thinks that this goes too far, but the legal wording that will deliver such an outcome is surely going to be hard to find and even harder to agree.

5. An opt-out from social and employment policy. Britain used to have an opt-out of this kind written into the Maastricht treaty, but one of the first acts of Tony Blair’s Labour government in 1997 was to get rid of it in the Treaty of Amsterdam. To reinstate it would be harder than David Cameron seems to think, given that social and employment provisions are scattered in several parts of the treaty (making the legal drafting hard) and are considered by the other member states to be an integral part of the single market (making political agreement even harder). Why should the other countries agree to something that will either give the UK a competitive advantage or impair the rights of workers in their own countries? Some small concessions in some areas may be possible, but demanding anything general or major looks as though it will lead to a serious fight.

6. An opt-out from criminal justice measures. In the Amsterdam treaty, where all this started, and in the Lisbon treaty that is about to come into force, the UK already has the right to choose whether or not to take part in European cooperation on criminal justice. Perhaps Mr Cameron’s complaint is that the Labour government has in the past often agreed to take part in these measures and he now wants to reverse those decisions. As with social and employment policy, some small changes might be possible but larger ones will be much harder.

In his speech, David Cameron sought to emphasise that, while the three changes to European laws that he sought required the agreement of the other member states, he did not expect them to refuse given that they would not have an adverse impact on those member states. In that respect, he is wrong.

I have already mentioned the impact on the single market that might come from a British opt-out on social and employment policy. The current British opt-out from the Charter contained in the Lisbon treaty already reduces the rights of non-UK citizens in that it limits their ability to bring cases against the British government on human rights grounds (and there are several million such people in the UK) and any government is going to be interested in the rights and well-being of its expat citizens in other countries. And this blog has written repeatedly about the importance of cooperation in the field of criminal justice and extradition, given that a country that provides a safe haven for criminal fugitives is actually a danger to its neighbours.

In each of these three cases, the impact on the other member states might be small, but it is not non-existent. Any attempt to open negotiations on these points needs to be aware of this fact.

Mr Cameron hopes that his new policy will lead to a settled and sustainable relationship between Britain and the rest of Europe. He will need to satisfy both his anti-European critics within his own party and the governments of the 26 other EU member states. He may find this quite hard.