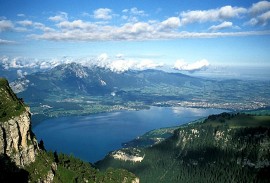 British schoolchildren are being invited to study and compare the British and Swiss systems of government using a project pack being sent to secondary schools by the Swiss Embassy.

There is a competition in which schools are invited to enter teams in age ranges 11-13 and 14-16. Shortlisted teams will be invited to London to debate the case for change on an issue and to visit the Houses of Parliament, and the national winners will be given trips to Switzerland, visiting the Swiss Parliament in Berne and the UN in Geneva.

The material in the pack highlights “the values of using direct democracy to bring issues closer to citizens”. Switzerland is described as a “bottom up” system while the British system is “top down”. The Swiss system is said to be slow but stable; the British system in which government and parliament take decisions largely without consulting the people is described as often faster but “more subject to short-termism as politicians live from one election to another”.

The two systems are illustrated in the form of triangles; the British one has the Queen perched uncomfortably on top of a heap with normal people at the bottom; the Swiss triangle is upside down with the people on top and the President of the Confederation apparently bearing the whole weight of the democratic system.

Matters discussed in the pack include different electoral systems, popular initiatives and referendums including developments across the EU.

The emphasis on consensus building is mentioned but the lack of any sense of a role for an opposition is not.

The Swiss system is described as “bottom up” but not as “federal” although there are references to the Confederation and the federal government and institutions.

There is discussion of the difficulties which direct democracy may create if Switzerland joins the EU and of the fears of some Swiss for change in their institutions if they join. The Swiss government, the Federal Council, has only seven ministers; no reference is made to the difficulties this may cause in EU Council meetings. This lack of political ministers gives a greater political role to national civil servants.

The pack is written by Julie Easy of the Institute for Citizenship with contributions by Bruno Kaufmann of the Initiative and Referendum Institute Europe (IRI) and Paolo Dardanelli of the University of Kent and is linked to the Local Government Association’s Local Democracy Week, 18-24 October. Competition entries have to be submitted by 25 February 2005.

The pack highlights the attractions of the Swiss system; could this be part of an attempt by pro-EU elites in Switzerland to make EU countries become more like Switzerland and so make EU entry more attractive to the Swiss? This is in parallel with an initiative which many British people would applaud;: the Swiss Embassy held a Railway Timetabling Workshop; the British participants agreed that Britain should adopt Swiss methods.

The schools project is one of a number of initiatives which have been undertaken while Bruno Spinner has been Ambassador in London; he is now leaving so let us hope that such activity will continue under his successor.

The schools packs should have reached teachers of citizenship; secondary schoolchildren should be encouraged to see them.