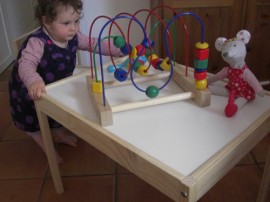 Your blogger took a break from worrying about the fate of the euro or the prospects for further constitutional reform in UK to build some furniture for his baby daughter.  I had bought one of those flatpacks from IKEA that turn out to be harder to put together than at first it seems.

So, not much of change from thinking about the European Union then, after all.  There are three parts to be put together, each of which needing the others.  The EU needs to expand to include all of Europe that wants to join, it needs to develop effective policies at the European level to deal with the issues that individual countries cannot deal with on their own, and it needs to grow a system of democracy by which it acts and takes its decisions.

To enlarge too quickly would have diluted the common policies such as the single market, to leap ahead with policies will make it harder for countries to join or for the public to accept, and there is no chance of creating a serious democracy if the policies or the political community are indistinct.  All three strands of development of the EU have to develop together.

Of course, this leaves the EU open at any time to the criticism that it is too small and apparently exclusive, or that it is ineffective, or that it is undemocratic by comparison with its member states.  Its wiliest critics make all three complaints at the same time.

Advocates of Europe have to understand that this is the process they are embarked on and that the three criticisms have to be seen and answered in this light.  Flatpack furniture may sometimes be fiddly and awkward to set up but with care it can be a cheap and easy way to bring convenience and even comfort into the home.  Europe can be fiddly and awkward too, but it is still worth the effort of putting it together.