The state we’re not in

Home/Blog/The state we’re not in

The state we’re not in 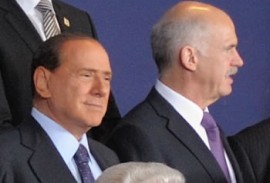 Silvio Berlusconi and George Papandreou, prime ministers of Italy and Greece, on the way out (picture European Commission)

The eurozone crisis lingers on, wreaking more havoc in the markets and bringing down yet more European governments.  The Greek prime minister has resigned, and the Italian prime minister is rumoured to be resigning, in each case to be replaced by technocratic figures unimplicated in the worst excesses of the previous regimes.

And what excesses.  The state-owned railway system in Greece, for example, is reported to have a salary bill four times its ticket revenue, that’s even before you think about running any trains.  It suits people in politics, of course, to have places to put their supporters, and who wants to face a national train strike, but how can any economy compete on a European stage when it is dragged down by the costs of what ought to be national assets.

It was one of the arguments in favour of the euro, back in the days when anyone was interested in such things, that it would increase competition and force down prices and iron out inefficiencies in the marketplace.  Quite quickly we saw that happen in the private sector, but the public sector has been rather slower to react.  It is a matter of perpetual astonishment to me that people who call themselves conservatives complain that governments are, at last, being forced to address structural problems in their national economies and political systems instead of simply borrowing money and postponing the day of reckoning.

A key element of any reform of the eurozone will be tougher rules on how national finances may be managed in future.  The fact that problems in Greece, representing only 2.5 per cent of its GDP, can prove a threat to the wellbeing of the whole eurozone shows that these rules are needed.  Interdependence between countries that share a currency has gone so far that they can no longer pretend that all they share is the design of the banknotes.  No, their most intimate economic decisions are now influenced by what the others decide.  Those influences are now what they must accept.

Had the national governments taken this view at the outset, the eurozone would not be in this mess now.  Overall public debt in the eurozone amounts to no more than 85 per cent of GDP – high, certainly, but not unmanageable and certainly no reason for a major political crisis.  The problem is not the presence of debt but the absence of the view.

In the 1980s, the preparatory work for creating the single market included an assessment of the impact of the non-tariff barriers which it was proposed to abolish.  This was termed “the cost of non-Europe”.  A similar exercise today would show just how much of the lost economic output since the crash started in 2008, and how much of the losses of jobs, savings and opportunities, can be attributed to the fact that Europe’s politics is still lagging behind its economics.