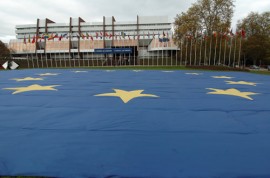 At the heart of the British attitude to Europe is a misconception. We know that our own political system is highly centralised, and we often assume that any European system must inevitably go the same way.

But this is not the case. If the European Union continues to develop in a federalist direction, democracy will be strengthened and over-centralisation prevented, and not the reverse.

For an effective and more democratic European Union

This manifesto is designed to mobilize committed Europeans to campaign for an effective and more democratic European Union and one that exercises its full potential in world affairs.

The European Union’s past achievements

The European Union is a unique political structure, created in the 1950s by long-established sovereign and independent nation states pooling some of their powers to be exercised in common by the European institutions. The Union’s two immediate objectives were to end for ever the wars between them which, over the centuries, have cost so many millions of lives, and to restore prosperity to the war-torn continent and its peoples. Both objectives have been achieved: wars between the economically integrated members of the EU are no longer possible and the level of common prosperity achieved is without precedent. Today, the Union has progressively been enlarged to twenty seven members with a population of some 500 million and a gross domestic product greater than that of the USA. It accounts for one fifth of world trade and provides more than half of all global aid to developing countries. It has a single currency increasingly recognized as a major pillar of the world’s economic system. For most of its geographical area, the Union’s citizens can travel as freely and conveniently as they do within their own countries. All these are achievements of which Europeans can rightly be proud.

The rejection of the Constitutional Treaty by French and Dutch referendums in 2005 demonstrated some alienation from and widespread lack of public understanding of the European Union and its objectives, and exposed a democratic deficit in its operations, which must be reversed. But the EU also faces new challenges to its global interests. Foremost amongst them are climate change, security of energy supplies, control of inward migration, terrorism, and the promotion of peace and prosperity in the rest of the world. The new Lisbon treaty offers a framework within which these challenges can be tackled, provided its provisions are fully exploited.

Equally important for Federal Union is the Lisbon treaty’s recognition of the European Parliament as a co-legislator with the Council in most European legislation. The treaty also guarantees greater openness in the work of the Council. The EU system is clearly moving towards a traditional two chamber parliamentary system, and the greater transparency of the Council’s work will make it easier to hold its members to public scrutiny and accountability. The treaty moreover opens new avenues for national parliaments and national publics to carry out this scrutiny. The greater involvement of national parliaments in the European legislative process and the new right of citizens’ initiative are major steps towards a more legitimate and accountable European Union.

The Lisbon treaty also marks a first, but not yet complete, attempt to describe the allocation of powers between different tiers of government in the European Union. Full understanding of this allocation is crucial for public acceptance of the Union and its structures. Federal Union believes that powers exercised at the European level should be confined to issues which cannot be managed effectively only at national level. The division of responsibilities should always be governed by the federal principle of subsidiarity whereby decisions are taken as close to citizens as possible, with higher tiers of government acting only when the common interest so requires. These principles are far removed from the spectre of a “European superstate” sometimes invoked in this country. On the contrary, a European Union organized along federal lines is the best guarantee of the continuing effectiveness, stability and political identity of its member states.

Federal Union welcomes the provisions of the Lisbon treaty providing for the appointment of a High Representative to chair the Council of Ministers of Foreign Affairs and to be a Vice-President of the European Commission, supported by the new “European External Action Service”. This will be a significant move towards providing the EU with a single voice representing its political and economic interests in world affairs. The emergence of potential new superpowers such as China and India and the economic strength of the EU after its enlargement are moving us towards a multipolar world where economic strength will be shared. Within the next decade, it is estimated that the USA, China and the EU will each account for nearly one fifth of world GDP, with India 10% and Japan 5%. Only in military capacity will the USA remain predominant. The EU is and will remain an international actor with considerable capacity to influence events on the world stage.

On such global issues as climate change, world trade and combating world poverty the EU already gives a clear lead. Federal Union believes the EU should extend its involvement in securing peace in the Middle East and build up closer relations with India, China and Russia while retaining its traditionally close relations with the USA. The EU is well placed to make its own, unique contribution to world peace, acting as a model for other historically divided areas of the world. This model has already found imitators such as Mercosur in Latin America, ASEAN in south east Asia, the developing African Union and the free trade agreement between USA, Canada and Mexico.

The challenges and opportunities now offered to the European Union will depend for their resolution and exploitation on governments and politicians, and upon opinion-formers acting upon them. To persuade governments and politicians to meet their responsibilities is the responsibility of committed Europeans. The UK, with its opt-outs and suspicion of justifiable new developments, has not always played in the past the constructive part that it could and should have. It is the urgent task of committed Europeans in the United Kingdom and elsewhere to persuade British public and political opinion that the United Kingdom should in future play a more constructive role in the European Union, in their own interest, in their continent’s interest and in the interest of all humanity.