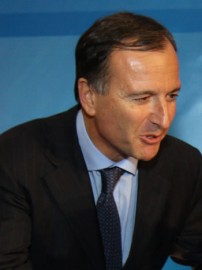 Italian foreign minister Franco Frattini has spoken out against the apparent joint preparation of EU decisions by Germany and France.  “Pre-cooked decisions” are not acceptable, he says.

Indeed, the whole point of the EU institutional system is to ensure that decisions are taken by all member states together, rather than imposed by some upon the others.  Nevertheless, the supranational institutions have not completely abolished intergovernmental diplomacy, despite what some eurosceptics might think, and national governments still get together to coordinate their strategies within those EU institutions.

And this is Mr Frattini’s real complaint.  Not that the decisions are pre-cooked, but that the chef is not Italian.  He calls instead for a G6, including France, Germany, the UK, Italy, Poland and Spain, that should lead the European Union.  Let us ask the Romanians or the Dutch whether this is acceptable to them.  Why not a G7 or a G8?

The whole point of the EU institutions is to ensure that decisions are taken by all member states together, rather than imposed by some upon the others.  It is the European Commission that should take the lead, not a GN group of countries, where N is a number large enough to include the home country of whoever is voicing the criticism.