Glad to be out of sync

Home/Blog/Glad to be out of sync

Glad to be out of sync 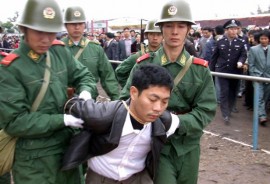 The comments posted on Twitter by death penalty campaigner Paul Staines are revealing.  He said that:

“US, India, China and Japan all have the death penalty on statute books. We’re out of sync with world’s leading powers.”

His eurosceptic inclinations are repeated in that list of the world’s leading powers, but what are we out of sync with?

“In 82% of the studies [reviewed], race of the victim was found to influence the likelihood of being charged with capital murder or receiving the death penalty, i.e., those who murdered whites were found more likely to be sentenced to death than those who murdered blacks.”

This is not a legal system, it is the old lynch mob given respectability.  I am glad that Britain is out of sync with that.

And then there is China, where the bodies of executed prisoners are mined for organs for transplant operations.  It is one thing, and a noble thing, to choose freely to donate one’s organs after death; it is quite another to steal them from somebody who has been killed.  I am glad that Britain is out of sync with that, too.

Here is the petition, if you wish to sign it, along with a rival petition against restoration of the death penalty:

In favour of death penalty  http://epetitions.direct.gov.uk/petitions/138