A deal with the Czechs

Home/Blog, Europe/A deal with the Czechs

A deal with the Czechs 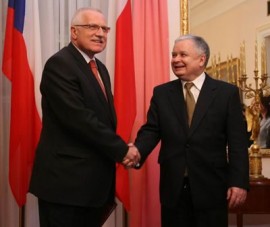 So, a deal was struck with the Czech Republic to get the Lisbon treaty through. An opt-out from the Charter of Fundamental Rights, along Polish and British lines, was added to the treaty, and that was enough to satisfy the Czech president, Vaclav Klaus. (Read page 15 of the European Council conclusions here.)

Opponents of the European Union say they find the manner in which agreement was reached unedifying: they are right, but for the wrong reasons.

The treaty that will finally come into force is not the quite the treaty that the Czech parliament thought it was voting for. Czech citizens will be denied the right to litigate against their own government on the strength of provisions in the Charter, a denial of rights that will be approved retrospectively by the Czech parliament in the next accession treaty (probably for Croatia). This is a rather clumsy and inelegant way to give or deny rights to citizens, but it is a principle of the European Union that it is for each country to decide for itself how to ratify the treaty and if this is what the Czechs want to do, they are entitled to do it.

The argument put forward by federalists that member states have obligations towards each other even in the way in which they ratify the treaty still holds good, and indeed gets extra force from the Czech example. It remains an error on the part of the European convention not to have considered the ratification procedures as an intrinsic part of the whole treaty-drafting process. If ever there is to be another treaty, not only the content but also the manner of ratification needs to be thought about too.

Two other observations arising from the Czech experience. First, the opt-out demanded by President Klaus was entirely unnecessary. His concern was to ensure that the Beneš Decrees could not be overturned by the Charter of Fundamental Rights, and that therefore the Charter had to be disconnected from the Czech courts.

The Beneš Decrees were established in the aftermath of the second world war and the expulsion from what was then Czechoslovakia of the ethnic Germans who had lived there. The rights of the expelled to return and reclaim property were annulled by these decrees, and there is an insistent lobby in Germany and Austria, composed of these expelled Sudeten Germans and their descendants, that they should be overturned.

An analysis of the issue by Professor Steve Peers, of the University of Essex, published by Statewatch argues convincingly that the Charter could not be applied anyway. It has been established by the European Court of Justice that EU law, of which the Charter is part, only applies to member states after they joined the EU. It cannot be backdated. The Beneš Decrees therefore, because they date from the 1940s, predate Czech membership of the EU and are beyond the reach of the Charter. (Read Steve Peers’ briefing here.)

A second point relates to the intervention of the Czech president in this matter at all. The Czech constitution, like most national constitutions within the EU, requires ratification of the treaty by parliament, with, as with all other laws, a final signature by the head of state. The presidential signature was conceived of as a symbolic, procedural act, and not the expression of a political opinion. UK law only comes into force when it has received Royal Assent, for example, but that does not mean that the Queen has a veto over all Acts of parliament.

However, the Czech president, who unlike the British Queen has an electoral mandate of some kind, has chosen to interpret the constitution differently. He has turned his duty to sign legislation into a right, and has imposed his views upon the country against the will of a majority in the parliament.

What this shows is that systems of government, even those founded upon written constitutions, are dynamic systems, not static ones. It is not possible to define precisely how a political system will work in advance. The argument put forward by some federalists that there is a profound difference between a set of treaties and a constitution looks more theoretical than practical, in this light. In reality, there is a continuous spectrum of political documents, and the transition from treaties to constitution will be gradual and not dramatic in its effects. Some federalists may have oversold the consequences of having a constitution; many eurosceptics have certainly exaggerated the dangers.