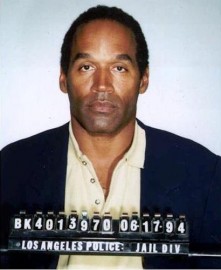 O J Simpson is in trouble again. This time he is on trial for kidnapping and robbery, having been acquitted famously of murder back in 1995. A problem for the courts, though, is finding a jury who can approach this case with an open mind. Is there anybody who doesn’t know what happened last time?

Somehow, this problem is going to have to be solved. Everybody, from the highest to the lowest, from the most famous to the most obscure, is entitled to a fair trial. It can be hard to arrange, maybe, but it needs to be done. The alternative is simply to let O J Simpson go, in which case the complaint about there being one law for celebrities and another law for the rest of us becomes ever more true.

The reason I write about it here is that we have heard this argument before, in the context of the trials of political leaders for crimes against humanity. These are unusual cases, people say, which can’t possibly be fair. The procedures used to deal with Slobodan Milosevic, say, were unjust and should not have been followed, and no-one in his position should ever be tried in that way.

I agree that high profile trials are difficult, but they are still necessary. The arguments used about the impossibility of bringing Milosevic to justice were really arguments about fame, not about politics. Heads of state should be just as much subject to the law as everyone else.