A good man in Africa

A good man in Africa 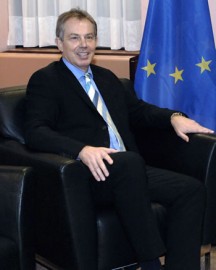 The latest stage in Tony Blair’s farewell tour – his speech in South Africa last Thursday – is one of the most frustrating. (Read the speech here.) It is one of the moments when the gap between motives and methods becomes most pronounced.

Tony Blair cares about Africa, you see. It hurts him that so many Africans live in poverty, threatened by disease, endangered by conflict, and he wants to do something about it. At the very opening of his speech, he declares:

“I believe in the power of political action to make the world better and the moral obligation to use it.”

Now, this blog has been rather unimpressed by Tony Blair on previous occasions, so I am going to try and adopt a different tone. Partly that’s because I agree entirely with his sentiments about the need for political action. I think it is appropriate to try and change things that are bad about the world rather than simply to examine them and wring one’s hands. Isn’t that what politics is for?

There are schools of thought that reject this view, one on the grounds of the pre-eminence of national sovereignty, another on the grounds of practicality. Tony Blair is swayed by neither of those: in the former case, to his absolute credit; in the latter, I’m not so sure.

First, on sovereignty, the case is straightforward. So many things that happen in one country can spread to others. Much better to intervene at source and prevent such things from starting. The genocide in Rwanda in 1994 led to instability in the entire region and made the war in the Congo so much worse. Under the rules of state sovereignty, that’s a pity but no more than a pity. Better in my view to rewrite those rules.

The grounds of practicality are harder. Take the military intervention in Sierra Leone. That country is now a more stable place than it was before British soldiers were deployed there in 2000, but remember that the first deployment of soldiers was not in order to stabilise the country but to protect foreign nationals. As it turned out, a military mission that was launched for one purpose turned out to be maintained for an entirely different one. Establishing the bona fides of any military intervention is difficult.

Furthermore, where is the capacity to repeat the intervention elsewhere? British armed forces are already stretched beyond limits in Iraq and Afghanistan, and Blair shows no sign of strengthening them in the way that might be needed. We’re getting Eurofighters and the Trident replacement, not the kind of military capacity to do the jobs that Blair says need to be done. The limits on Britain’s ability to act are to a considerable extent self-imposed. That’s not a very convincing argument against acting.

And lastly, or perhaps this should be first, do interventions of this kind actually work? The notion is one of going round Africa, fixing up problems one at a time according to our own definitions of “problem” and “solution”. It’s not easy to disagree with this idea, but it is hard to see how it works in practice. Alan Beattie in the Financial Times on Friday was very critical of Blair’s record here, increasing aid, championing individual leaders, calling for more trade access. Aid is near the limits of what can usefully be spent, individual leaders turn out not to be rooted in Blair’s idea of democracy after all, Africa already has the best trade access of any country. Niall Ferguson in the Sunday Telegraph today is even crueller. Possibly the biggest beneficiary of the Blair approach to Africa is the self-image of Mr Blair himself.

But I was trying to adopt a different tone this time. So here are some good things about Tony Blair’s speech:

– his rejection of national sovereignty as a reason not to act – I’ve already remarked upon it once but I’ll say it again because it’s important
– his backing for the African Union, both as a peacekeeping force and as an institution in its own right – closer links between the EU and the AU, for example
– his call for a rethinking of rules of origin for preferential imports, so that trade between third countries does not become a reason to keep imports from the poorest countries out of European markets
– more aid – there are limits to what can usefully be spent, but those limits have not been reached yet
– African representation on the UN Security Council – it will be interesting to see whether this means Africa as a whole, or merely one of the larger countries from Africa

So, some good points to say about Tony Blair in Africa. And the person who benefits most from this? Probably me.