A parliament with a purpose

Home/Blog, Europe/A parliament with a purpose

A parliament with a purpose 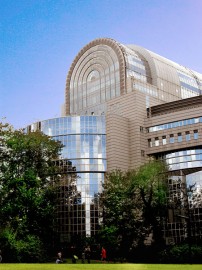 European Alternatives is circulating a petition calling upon the European Parliament to try to attach conditions to its approval of the members of the next European Commission. (You can read the petition here.) The EP is currently scrutinising the appointments that have been made, giving the lie to the notion that the Commission is run by faceless placemen.

The three conditions suggested by European Alternatives are as follows:

3. International representatives agreed by the citizens
Nominations for the key posts of the EU External Action Service should be approved by the Parliament after facing a hearing. If these people are meant to represent EU citizens abroad, they must have the approval of the citizens’ representatives.

I am not quite sure how the second point would work in practice. Introducing more disparate voices into the process would probably weaken the EU’s influence in negotiations – this is one of the reasons for trying to have a common European foreign policy in the first place – and the Lisbon treaty requires in any case that “The High Representative of the Union for Foreign Affairs and Security Policy shall regularly consult the European Parliament on the main aspects and the basic choices of the common foreign and security policy and the common security and defence policy and inform it of how those policies evolve. He shall ensure that the views of the European Parliament are duly taken into consideration.”

The first proposal is the best one. The European Commission may have the monopoly on the right to propose legislation but that does not mean that it has, or should have, the monopoly on ideas. The exclusive right that it has to propose legislation is sometimes taken as an expression of a bureaucratic approach but it is not, of course. In most member states, legislation starts life as a proposal from the government; the opportunity for individual backbenchers to propose new laws is actually rather rare. Ensuring that all legislation emanates from the Commission ensures that there is some coherence and consistency in the legislative life of the Union.

However, it is a central part of the federalist vision that the legislative process within the EU should become ever more political. Giving the EP the right to call for a legislative proposal would enable the political parties contesting the elections every five years even more scope to present to the voters choices about the future political direction of the EU. It is not so much the parliament that would be enabled to take “real decisions” (I think it does within the current system) but the citizens. And in their hands, surely, is where the “real decisions” belong.