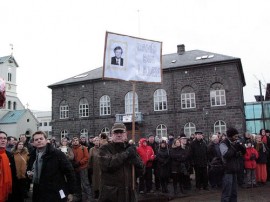 Conservative anti-European MEP Daniel Hannan writes from Iceland that, rather than bailing out the banks, they should have been allowed to crash. The apparent health of the Icelandic economy is proof that this would have been a better thing to do. Financial assets may have lost value, but real assets are as robust as ever.

This is a tragic example of a politician thinking small. Just because one country does something does not mean that every other country can do it too.

First, think about the banking bailout. What actually did it consist of? Some banks and insurance companies were propped by public money to prevent their collapse, a collapse which would have led their trading counterparties also to collapse, with bankruptcy rippling throughout the financial system. One might argue that there is a cost to the public purse of this bailout, but there would have been a greater cost if widespread bankruptcy had been allowed to proceed instead.

A major reason why the Icelandic economy appears health despite the bankruptcy of its major banks is that other countries did not go down the same route. They remain viable trading partners, able to buy Icelandic exports and to continue to supply Iceland with the imports it needs. If the credit crunch had been allowed to become worse – governments provided large amounts of money as emergency loans to otherwise solvent banks that were facing a liquidity crisis – trade credit would have dried up and with it the trade upon which a small, specialised economy such as Iceland’s depends. If the other countries had seen their economies collapse, many fewer of their citizens would be able to afford to travel abroad as tourists.

Which brings me to the second reason, the exchange rate. One of the ways in which the Icelandic economy has bounced back is the collapse in its exchange rate. Imports become more expensive and exports cheaper: this is Nature’s way of rebalancing the economy. Iceland used to be an expensive tourist destination but has now become a cheap one.

However, this is only true in the eyes of people whose own currency has not devalued. The generalisation of the Icelandic economic model would require everyone to devalue, which is of course not possible. Devaluation all round leaves nobody better off.

So while a particular economic strategy might make sense for a small country, it is another thing to say that it make sense for a larger one or for the global system as a whole. Iceland has been able to follow its own particular policies against the backdrop of a global economy stabilised and guaranteed, for better or worse, by the United States. Iceland’s economic fortunes would be very different if the US had followed the same model.

And this leads to a very serious problem, namely the inability of the United States to maintain this stabilisation role indefinitely. For most of the 19th century, this was played by Britain, with America taking over after the first world war. A central part of the settlement after the second world war was the creation of the Bretton Woods institutions which enshrined American hegemony, and particularly economic hegemony, at their heart. However, that era of hegemony is coming to an end.

While America remains the world’s largest single economy, it is no longer massively so. It represented about 50 per cent of world GDP in 1945, and only 25 per cent today. The limits of military power have been displayed in Iraq and Afghanistan: it is not as powerful as it thought it was.

If the US is to give up this role as anchor of the global economy, what might replace it? This is where Europeans have got to stop thinking small.

After all, the eurozone represents 21 per cent of world GDP, and the EU as a whole 28 per cent. It could have just as great a claim as the US to anchor the world economic system, if it had the political means of doing so, but would face just the same limitations if it tried to do so alone. As part of a consortium, however, it might have a chance.

A partnership between America, Europe and some other economic powers could establish a new means of regulating the world economy and guaranteeing its trade flows, in a way that none of them could do on its own. And if Europe is to play a part in this, it must do so as a united whole. The individual European countries are too small to exercise influence in such a system, but the EU together can do so.

The question for European countries is whether they wish to take part in creating such a system, or prefer instead to be at the mercy of whoever in the end does so. They can think big, or they can think small.

It would be much better for Europe if America, have taken over leadership of the world economy from Britain 90 years ago, passed it on to an international consortium rather than to another single country, for that other country could only be China. And a world following China’s rules could be a rather less congenial place for liberal politics and economics.