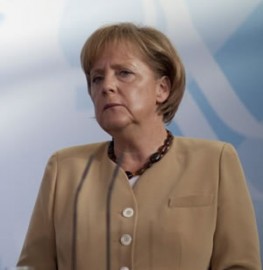 Angela Merkel, chancellor of Germany - has she got what it takes to save the eurozone? (picture European Commission)

A very interesting comment here by Centre for European Reform chief economist Simon Tilford, wondering whether the national governments of the member states of the eurozone have got what it takes for the eurozone to survive.

He is very worried that they have not.  They are “wilfully naïve”, he says, if they think that the eurozone might lose one or two members but no more than that.  If the eurozone starts to fragment, it will lose Spain, Italy and France as well as Greece and Portugal.  Its role as a centrepiece of the European Union as we know it will be at an end.

In a range of policy areas, including debt mutualisation, the role of the ECB as lender of last resort, bank recapitalisation, and economic policies to promote growth, the national governments are behind the curve of developments in the marketplace, leading to the conclusion that

“On current policy trends, a series of sovereign and banking defaults are unavoidable.”

The first four words of that sentence are important, but what will it take for those policy trends to change?  The first thing is for national political elites to realise just how serious the crisis is, and the second is that they must realise how their attachment to the old national ways is part of the problem.

My phone buzzed with a call from a colleague objecting to Simon Tilford’s final sentence:

“Indeed, if there is one thing this crisis has shown, it is that the nation-state is alive and kicking in the eurozone.”

The kicking of the nation state, he said, is on the end of a self-tightening noose.  The nation states that might come out of this crisis, if they fail to adopt the right policy responses, will be impoverished and enfeebled and unable to help their citizens find their way in the world in the manner that they might have hoped.  The whole point of the European Union, from the very earliest days, was that there were things that the national governments could not achieve separately but which they could achieve together.  EU institutions and supranational cooperation have proven themselves to be the essential means of making European cooperation work.  The crisis of some countries in the eurozone, and the failure of solutions founded on the national states themselves, shows that the need for Europe has not gone away and is in fact stronger than ever.