And welcome back, Peter Mandelson

And welcome back, Peter Mandelson 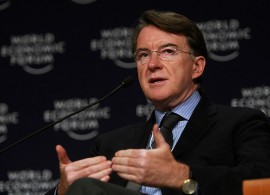 As one hate figure for the right departs the stage, another returns, with the appointment of Peter Mandelson as secretary of state for business.

The newspapers describe this as a return for him to “government”. Well, as member of the European Commission, that’s exactly what he’s been doing in Brussels for the past four years. He is merely switching from one level of government to another.

And the way that can be done tells another story. For a Europhile like me, who wants to see the European level of government become democratic and accountable, it is rather frustrating that its political structures and coalitions can be picked apart so easily by national politics. In place of Peter Mandelson there will be from the UK Baroness Ashton, not as the result of an election or even a parliamentary process but as the result of a prime ministerial decision.

Baroness Ashton will have to go through an approval hearing in front of the EP, (something she never had to do when assuming any of her previous government jobs, I might point out) but nevertheless the notion of a coherent European political process takes a knock at a time like this.

What it goes to show is not the undesirability of European politics but rather the extent to which it is still undeveloped. For Peter Mandelson, it is more attractive to return to the UK to help Labour try to win the next general election than it is to stay in Brussels to help the Socialists try to win the EP elections next summer. That may be a pity, but it is evidently a fact, and rather undermines the case of the Eurosceptics who fear that Brussels is taking over British politics. No, Peter Mandelson is doing that, if that is any comfort to them