Blair’s reliance on summits is misplaced

Home/Europe/Blair’s reliance on summits is misplaced

Blair’s reliance on summits is misplaced 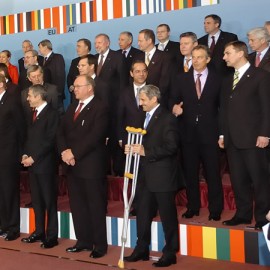 Tony Blair’s recent comments that next year’s EU summit in Barcelona will be “make or break” inspire nothing so much as foreboding. For the record of summits in making anything is not impressive. And all that gets broken are the town centres where the summits are held.

Think back to the Nice summit, for example. Its aim was to produce a treaty that made the EU ready for enlargement, and that would reconnect the institutions with the citizens. And look at the Irish referendum result. The EU is as democratically distant as ever.

Blair conceded at the conclusion of the summit that the working methods had to change. Haggling late at night when everyone is too tired to think straight is hardly the best way to do business. The Hague summit on climate change broke down in precisely these circumstances. The EU’s Amsterdam treaty was ratified with errors that sleep-deprived officials didn’t spot.

But conceding that working methods need to change is one thing: actually changing them is another.

Intergovernmental summits, meeting in secret and voting by unanimity, are somewhat less efficient and substantially less accountable than the open workings of democracy. The European single market needed majority voting and parliamentary scrutiny in order to work properly. The European Union as a whole needs the same.

This article was contributed by Richard Laming, who may be contacted at [email protected]. The opinions expressed are those of the author and not necessarily those of Federal Union.

The case for a Federal Europe