Can competences be shared in the European Union?

Home/Europe/Can competences be shared in the European Union?

Can competences be shared in the European Union? 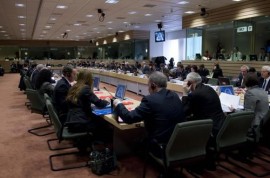 Letter to Ferdinand Mount, columnist in the Sunday Times, 13 April 2003

I read with interest your piece in the Sunday Times today – I think there is more sense behind the section in the draft European constitution covering shared competences than you allow in your article.

Federal Union has been giving this matter some thought, and this where our conclusions have reached.

The problem is how the EU should deal with issues such as healthcare which are predominantly issues in the hands of the member states but where there is also a small international element. Immigration is the biggest cause of new HIV infection in the UK, for example; a European health monitoring centre is under consideration at the moment. What used to be a purely national issue is no longer. (Interestingly, or perhaps disturbingly, there is no mechanism for parliamentary oversight of the UK’s representation at the World Health Assembly, the governing body of the WHO which meets next month.)

Some kind of distribution of competences is needed to make sense of this in the European constitution. What are the options?

The traditional model of an exhaustive and definitive list of competences is not going to be able to cope with this kind of complexity. It would be absurd to have to amend the constitution every time a new technical policy initiative looked to be desirable.

It would also be a mistake to rule out the possibility of cooperation on these issues simply because a precise written definition of the limits of that cooperation cannot be produced.

A simple appeal to subsidiarity and the ECJ will not work either. Subsidiarity is like democracy or human rights: while each is a principle to be observed by the system of government, each needs to be defined by further laws covering elections or privacy or whatever. There is no substitute for decisions by politicians; decisions can’t be left only to constitutional lawyers and judges.

The shared competences in the European constitution need to be looked at in that light. Perhaps the list of policy areas is too long, but such a list is the only way to allow for the complexity of modern policy responses while still making room for the process of political decision- making. And that process of decision-making itself deserves a few words later on. Before then, though, I want to address another point in your article comparing the role of member states in the future EU with local government in the UK today. I think that this comparison is mistaken, for two reasons.

This is where the point about decision-making re-emerges. There is a serious lack of clarity and accountability within the EU as it is at present, for which a thorough programme of reform is required. Federal Union argues that the rotating presidency should be rethought, the Council should meet in public as an assembly rather than in private as a committee, and that the European Parliament should have full powers of co-decision on legislation and the budget. The enclosed papers on the presidency and the legislative process explain this in more detail.

It might be possible to accept the shared competences proposal but insist on a different decision-making system in some areas. Requiring unanimity or near-unanimity among the member states might protect against unwelcome developments in policy areas X or Y. However, X translates into French as agriculture and Y in German means industrial subsidies to significant regional businesses. The accumulation of Xs and Ys in 25 different member states leaves us with no European policy-making at all. Majority voting was introduced in order to make the single market possible: that need hasn’t gone away now.

Any period of constitution writing is going to require compromises of one sort or another, particularly given that the participating member states have such strong and diverse constitutional traditions of their own. The great advantage of writing a constitution as opposed to an intergovernmental treaty is that all the different issues – powers and competences – can be taken together. They are intimately linked and a serious consideration of them all is long overdue.