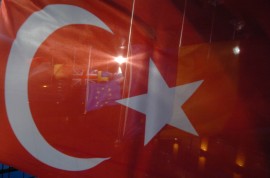 GEOGRAPHY: To be eligible for EU membership, a country has to have European territory, which is why Turkey and Russia may be considered and why an application by Morocco was rejected. This would also rule out the former states of the Soviet Union in central Asia, such as Kazakhstan. However, a geographical exception has already been made in the case of Cyprus, which has no territory in Europe.

There needs to be a sensible debate on these issues removed from fanciful assertions by senior politicians, which seem to be based more on eligibility for the Uefa Cup or the Eurovision song contest than geopolitical analysis.

Terry Bishop may be contacted at [email protected].