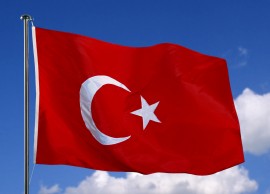 What’s your opinion on Giscard d’Estaing’s recent comments on Turkey entering the EU? I agree 100% with him. Turkey is an Asian country (and that is not talking about religion but geography). Muslim Albania, Kosovo, and Bosnia should be allowed to join when they are economically ready. How can a country which is occupying Northern Cyprus, denying the Kurdistan which lies within its borders any rights, and abusing general human rights be allowed to join a EUROPEAN Union?!

Federal Union doesn’t have a formal view of its own on this one, but I’m happy to set out my own views. I think there are four factors to think about: geography, religion, economics, and politics.

Regarding geography, the fact that most of Turkey is in Asia strikes me as irrelevant. There are EU territories outside Europe, in South America, the Caribbean, and the Indian Ocean, for example. The strict principle of keeping to the continent of Europe has already been broken. Given that it is actually next to EU members or applicants such as Greece and Bulgaria, there is no geographical reason to say that the EU border must be this side of Turkey rather than the far side.

Secondly, religion, again there are millions of Muslims in EU member states and applicants already. Europe is not, and frankly never has been, a uniformly Christian place. Its treatment of non-Christian minorities – Jews, Roma – is a blot on its history. The new Europe needs to be utterly secular as a political entity, protecting religious observance as a private matter for the citizen.

In terms of economics, this is something that can change with time. The process of enlargement to the former Communist countries requires substantial economic reform, and it is neither unreasonable nor unnecessary to require the same of Turkey. Substantial economic imbalances will not be good for the health of the single market and common travel area, after all.

Lastly, and there is a reason why I have put this one last, there are the political questions. There are in fact two questions: whether the EU should admit Turkey; and whether Turkey itself should choose to join.

The EU has already adopted the Copenhagen criteria in order to set down the political expectations to be met by applicant states. The human rights and minority questions need to be dealt with, but that is hardly to say that Turkey is a special case. The changes needed may be greater, but that is a matter of degree rather than of kind.

The more interesting question is whether Turkey itself will choose to join. By the time that the obstacles listed above have been overcome by Turkey, the EU will be a very different entity from what it is now. We can expect – we certainly hope – that its economics and politics will be much better organised at a continental level. It will be a much more coherent and significant player on the world stage. That is the EU that Turkey will be asked to join.

Furthermore, its trading and social relations with the rest of the world will become more open, through the WTO and the related influences of globalisation. This all adds up to quite an important point.

Over time, the economic difference between membership and non-membership of the EU will become less, but the political difference between membership and non-membership will become more. The benefits of EU membership will less importantly be participation in the single market and more importantly be participation in the European voice in the world. Is that what Turkey will want? At present, nobody can know. But this is the important decision that remains to be taken. And it is a decision for the Turks.

The same consideration applies to other neighbours of the European Union. For example, Morocco would be much better off developing its role in a growing supranational African political entity – the African Union represents some of these aspirations. Perhaps Turkey will prefer to be part of a growing political grouping in the near east, if such a body can become established.

My conclusion is that one cannot separate the political development of the European Union from political developments elsewhere in the world. If we pretend that building the EU is simply the recreation of the features of a national state at the European level, we will not solve the problems of conflict between states. We will merely transplant them to larger, more heavily armed states.

The development of the EU as a political entity has to be seen as a different kind of political process altogether. It is replacing the role of anarchy and force in international relations with democracy and the rule of law. This is the case both within the continent of Europe and also outside it.

This perhaps is one of the reasons why federalism is so central to the development of the European Union. It does not merely serve to describe the structure of the present-day institutions in Brussels, nor even only point to how they might be made more democratic and efficient. It also acts as a guide to the role that Europe should play on the world stage.

I stopped while writing this to watch the latest news from Iraq. Turning back to finish my reply, it is plain that today Europe needs federalism more than ever.