Citizens in Europe, citizens of Europe

Home/Europe/Citizens in Europe, citizens of Europe

Citizens in Europe, citizens of Europe 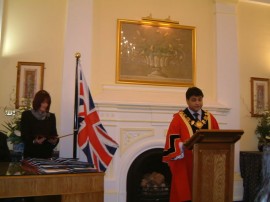 “Democracy requires not only the people. You can create the apparatus of a state at European level, with a common frontier, a single immigration policy, a common foreign and defence policy, and a single currency. All the attributes of the nation state, all its along the Monnet- functionalist model. But what we do not have and what we cannot conjure up is a cracy but also the demos, not only the state but also the functions, can be transferred to the European level demos – that is, a single European people.”

What will it feel like to be a citizen of Europe? The propositions currently being considered and debated by the Council of Ministers, the European Parliament and the new constitutional convention will in due course result in many changes to ordinary people’s relation to the EU.

So will the enlargement process, as 10 applicant countries in central and eastern Europe and the Mediterranean are expected to join in 2004.

The conference today will ask if Michael Portillo is right. Is the European Union on the road to becoming a European nation state? Or is it a different kind of political entity?

Is the EU simply going to take over the role of the nation state in the life of the citizen? Or is the nature of citizenship changing altogether?