During previous American presidential elections, this website has published analyses and reports of the candidates and their policy proposals. It may be a domestic election but it has implications for the whole world.

Such analysis this time seems rather unnecessary. There can’t be many readers who remain in doubt about who is the better candidate. And it’s not the chap who boasts – yes, boasts – of sexually assaulting women.

The interesting question is how come a candidate like that got so close to winning. (And might indeed still win.)

There are two competing theories, and probably both of them are right.

The first is that it is about money. Globalisation may have benefited everybody in aggregate, but people do not live in the aggregate. Some people more than others have been able to take advantage of new markets, new technologies, and new sources of labour.

The Polish plumber has benefited from the right to work elsewhere in the EU, as had the west European home owner who has hired him. The British plumber who has faced greater competition can be forgiven for feeling differently.

The chart below shows how incomes have grown during the golden 30 years of globalisation, from 1988 until the financial crash in 2008. Everyone got richer, but some got a lot richer than others.

The 1%, to the furthest right on the chart, did well, as you might have expected. So did the people in the band from about 50-70: these are the richer people in the poorer countries.

What is striking is that both groups did better than the people at 80-95%. These are the British plumbers, so to speak, who have experienced greater income inequality at home and greater competition abroad. They are still richer than they were, but you can see why it doesn’t feel like it.

The last eight years, not covered in the data above, have probably exaggerated the same trend. Quantitative easing has largely boosted asset values, to the benefit of those who’ve got assets. The continuing upward rise in the London housing market, already over-valued by historical standards, shows that something is going wrong.

Donald Trump speaks for that 80-95%. People who used to think of themselves as among life’s winners but no longer so sure. Populist nationalist economics is the answer, which will only make everyone poorer (except the cronies on the inside: they always do OK).

The second theory is that it is not about money but about identity. Support for Donald Trump, and for Nigel Farage and Marine Le Pen and plenty of others, is not just about economics. If it were, why build a wall? Why insist of serving pork in French schools? Why ban the burka? 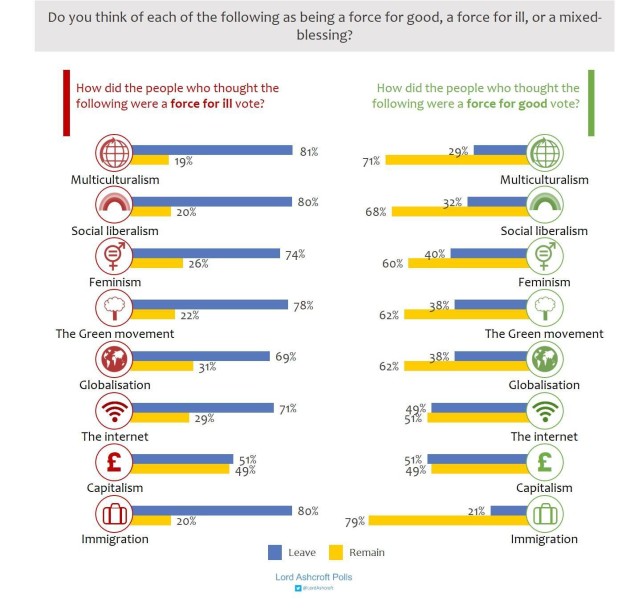 There was a strong correlation between support for multiculturalism, social liberalism, feminisim and immigration, and voting to stay in the EU.  Other data suggests that even the death penalty was a lot more popular among Leavers than Remainers.  This isn’t about detachment from the Brussels bubble, or differences of opinion on the hierarchy of norms.  No, this is something different.

Our populism is also authoritarian and nationalist, and perhaps the authoritarian nationalism is fact the point.  There were some liberal Leavers – “out of Europe and into the world” – but we’re not hearing very much from them now. The principal argument against the EU was never that it regulated badly but that it had foreigners in it (and if there was bad regulation, it was because of those foreigners).

Hilary Clinton has always supported a more outward-looking, less populist approach. Under pressure from Bernie Sanders, she abandoned her support for the TTPA, the trans-Pacific free trade deal, but if elected she will surely be open to finding a replacement.