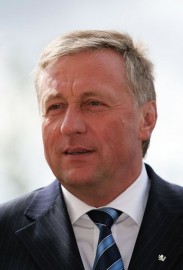 The latest news from the Czech Republic, famously that faraway country of which we know little, is that its government has collapsed. In a vote in the Czech parliament yesterday, the government of prime minister Mirek Topolánek lost a confidence vote by one vote. Experts expect negotiations to form a new coalition to follow, with elections also on the horizon.

The Czech Republic currently rejoices in the presidency of the Council of the European Union, which means that its ministers have a responsibility to chair meetings of the Council of Ministers, seeing to find compromises that suit the whole of the EU rather than pressing the immediate concerns of their own member state.

If the government has fallen, how can it continue to steer the Council? The question is obvious. Both the Czech government and the European Commission are putting a brave face on things, saying it will all be fine, but let me doubt that.

Even if, by some freak circumstance, the Czech government and the European Commission are on this occasion both correct, the broader problem remains. While dealing with potentially controversial issues, the ministers of the country that holds the presidency are supposed to put their own opinions to one side. It is easy to see that this is asking for trouble. How can partisan, party political figures be expected to play a different role for six months, returning to their normal irascible selves when the half-year is up?

In the financial markets, a major reason for the crash is held to be the misalignment of incentives. Traders were financially rewarded for behaviour that, in the long term, was bad for their companies and bad for the wider economy. One part of the policy response that is being assembled is to deal with this misalignment.

The same attention needs to be given to the structures of the EU. The role of leadership cannot be played on a temporary basis. The common European interest needs to be articulated with a long-term view. Only the European Commission can play this role, not a member state passing through like a barge on the Rhine or the Danube.