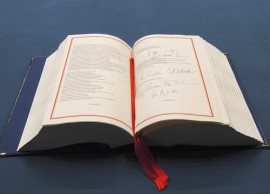 A question comes in from a subscriber to our e-mailings: What would Federal Union have preferred? The constitutional treaty or the Lisbon treaty?

My answer is the constitutional treaty, definitely. For three reasons.

1. The content was better. The changes to the constitutional treaty that produced the Lisbon treaty were, on the whole, steps away from what the federalists would have preferred. (You can read a comparison of the two treaties here.)

For example, the introduction of the double majority voting system in the Council of Ministers has been delayed. The confusing terminology than might suit institutional insiders but not the average voter has been retained rather than simplified. The whole document will be a bit more complicated than it needs to be.

2. The method was better. The constitutional treaty was the product of discussions in the European convention, which were held in public, involving national and European parliamentarians from both government and opposition political parties, from EU member states and from the candidate countries. The process that produced the Lisbon treaty was managed in private by officials of the German government in conversation with officials from the other member states. No openness, no parliamentarians, no opposition parties, no candidate states. The former method was preferable.

3. The timing was better. The constitutional treaty, had it come into force, would have come into force two or three years earlier. And Europe desperately needs the democratic reforms that the treaties contain.

However, there are still a lot of positive reforms common to both treaties, which is why even the Lisbon treaty deserves our support.