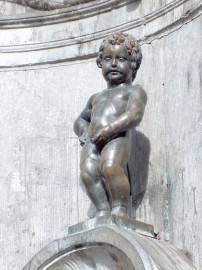 Manneken Pis, a reaction to the critics (picture Walter)

The Eurosceptic press has been delighting lately in the Belgian political crisis, in which no new government has been established since the general election back in June. Speculation is growing that the only solution to the impasse will be the break-up of the country altogether. It is famously composed of two regions, Flanders (Dutch-speaking) and Wallonia (French-speaking), and less famously of a third region, Brussels (where they speak almost everything), and might readily break up into those regions within the EU. For many policies, power is already devolved to the regions – agriculture, for example – and the chair of the EU’s Research Council was held by a minister from Brussels during the most recent Belgian presidency. Debate is therefore real over what powers still remain for the Belgian federal level.

The Eurosceptic press is loving it. The word “Brussels” has come to represent everything they don’t like, and drawing a distinction between the EU institutions, based in Brussels, and the Belgian government, based in Brussels, seems to be quite hard for them. Furthermore, some of them are taking the opportunity to say that the political crisis in Belgium shows how bad it is when you try to force together different communities in the same political unit if they in fact have nothing in common. This, they say, is what the EU is doing too, and that the EU had better stop doing it.

Allow me to interject a few facts. First, Belgium was created in 1830, so a political difficulty after 177 years is hardly evidence of a flawed political system. Next, the politicians who are pushing hardest for the break-up of Belgium are precisely the ones who have the least love for the EU. Flemish nationalists are at least consistent in their nationalism. Thirdly, a major reason why Belgian politics is not currently serving as a unifying force is the absence of federal political parties. Belgian political parties are in fact regional, aspiring also to play a role at the federal level. The weakness of their federal presence is a problem, not a good thing. (It is no accident that European federalists are arguing for stronger political parties at the European level.)

Lastly, even if Belgium should break up, is that such a disaster? It is not as if Belgium will disappear altogether. The cities of Bruges and Ghent are not going to slip beneath the waves; Holland is not going to acquire a south coast; life will go on, if in smaller political units. C E M Joad in “Why war?” wrote about how smaller political units might actually be better, not worse, because they are less tempted by the illusory glory of military might. Denmark was his example then (in 1939) compared with its immediate southern neighbour. (The crisis in Belgium has been followed closely in Scotland and Catalonia, too, where they are disinterested but not uninterested.)

And, approaching this question from the other direction, if the Eurosceptics are right and any “artificial” political unit is inevitably going to break up, the existence of the European Union makes it possible for that break up to be managed. An EU conceived as a union of states and citizens will better cope with new, smaller member states, than one conceived as a union of states alone.

There are lessons for the EU arising from the current problems in Belgium, but they are the opposite of the lessons that Eurosceptics are hoping to learn.

¤ ¤ ¤
Read the debate on the subject in the Financial Times here, including a typically incisive comment from the excellent Brendan Donnelly.