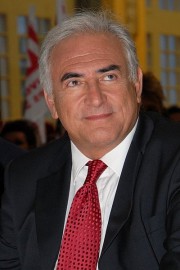 The resignation of French head of the International Monetary Fund, Dominique Strauss-Kahn, over allegations of a sex attack in a New York hotel room has restarted the debate about who should be appointed to lead the international financial institutions.  The tradition is that a European runs the IMF while an American is head of the World Bank.  But there are good traditions and bad traditions, and like powerful men molesting their secretaries and interns, this is a bad tradition.

Plainly, the background, including the nationality, of any candidate for a post like this will be a factor in how and how well they might do the job, but the bad tradition goes further.  It cements the idea that the purpose of the post is to deliver benefit to the country from which the post-holder comes, and cements also the idea that some countries can expect more benefits than others.  The whole point of supranational institutions is that their activities can rise above the conflicting interests of the member states to deliver collective benefits greater than could be obtained by the member states acting on their own.

Wolfgang Münchau writes in the Financial Times that, however much he shares that view of the IMF, the crisis among the eurozone countries is so severe that the its next leader needs to understand Europe thoroughly, and that means appointing a European.  He even suggests somebody (Christine Lagarde, of France).  But the crisis in the eurozone is severe: anyone of any stature in Europe has already been involved in it, and what the IMF needs is a standpoint on the problems independent of the individual member states that are affected.  That is the whole point of the IMF, after all.

Perhaps the IMF can find a European with the experience and ability and also the necessary degree of detachment from the mistakes that have previously been made.  (This notion of detachment is one of the things held against the candidacy of Gordon Brown.)  But to place more priority on geography than ability would be a mistake.

Another bad tradition is assuming that, just because somebody is accused of something, he is necessarily guilty of it.  Everyone is entitled to a trial.  But how can there be a fair trial of someone who is well-known to the jury and where there are no independent witnesses?  I am not entirely sure, but the New York legal system has to deliver as fair a trial as possible (as expensive lawyers will allow).

The alternative is no trial at all, and that is surely worse.  The last thing the world needs right now is more powerful men realising that they can act with impunity while making victims of the weak and unfortunate who happen to cross their path.  Everyone should be subject to the law, even politicians.

This issue falls within the scope of this website by way of rebuke to those critics of the International Criminal Court who claim that it politicises justice or makes unfair examples of high profile figures.  These two phenomena are unwelcome, agreed, but they are not confined to the international legal circuit nor are they insuperable.  Justice demands that solutions are found, wherever solutions are needed, in New York City, or in The Hague.