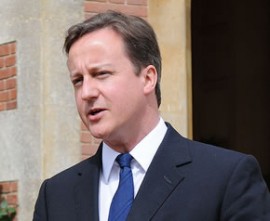 But there are some red lines we must never, ever cross.

Like the sight of the man responsible for the Lockerbie bombing, the biggest mass murderer in British history, set free to get a hero’s welcome in Tripoli.

It was wrong, it undermined our standing in the world, and nothing like that must ever happen again.

But, as this blog has previously remarked, the decision whether or not to release Abdelbaset Ali al-Megrahi was taken by a minister in the Scottish government, because the Scottish legal system is separate from that of England.  This is not the recent consequence devolution: it dates back to when England and Scotland were entirely separate countries, before the Act of Union.

The grounds for release were that, under Scottish law, a life sentence can be considered completed if there is a diagnosis of a terminal illness giving no more than three months left to live.

What does David Cameron plan to do to ensure that such an event can never happen again?  How does he, as the UK prime minister, intend to change Scottish law?  One of the characteristics of multi-level governance is that there are political decisions at one level which politicians at another might disagree with but be unable to change.  We await a suggestion from the prime minister what, if anything, his words are intended to mean.