G20: they came, they saw, they concurred

Home/Blog/G20: they came, they saw, they concurred

G20: they came, they saw, they concurred 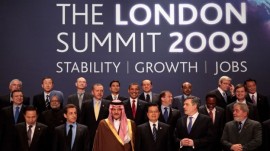 London has regularly played host to foreign leaders. From Julius Caesar onwards, the banks of the Thames have been visited by the same figures that bestride the world stage. The local inhabitants, from the blue-coloured woad-wearers to the city gents in pinstripe suits and bowler hats, have watched with fascination and sometimes a little resistance this succession of notables passing through. And, perhaps, looking at the demonstrators outside the Bank of England last week, we are now back to blue-coloured woad again.

But what did the G20 leaders actually agree? And will it actually make a difference to the problems the world faces?

The conclusions of the summit were neatly set out in a communiqué (which you can read here) with a lot of warm words about how the leaders of the most powerful national governments intend to work together in future to fix the problems of the moment. They have agreed to provide more money for the IMF, which will help some of the smaller, weaker countries in economic difficulty. (If a large country gets into serious trouble, even a beefed IMF will still be too small to help.)

They have resolved to coordinate their national fiscal expansion programmes, which is important: one of the complaints voiced in Germany was that much of the benefit that might flow from a fiscal stimulus there would be felt in other countries that were not paying for it, and that this was therefore a discouragement from embarking on such a stimulus in the first place. With the recognition that the spillovers can flow both ways across a border, the case for implementing stimulus plans becomes stronger.

There is an agreement not to engage in the competitive devaluation of currencies. The pound sterling has fallen in value by 30 per cent against the euro in the past 20 months, so the British have got their devaluation in early. I am sure they don’t want to see the pound fall further, but some of their trading partners might have liked to get in a bit of sneaky devaluation themselves. The important point, though, is that devaluations should not be competitive, for that leaves the global economy going round in circles doing nothing but stoking up inflation. A policy of beggar-my-neighbour will leave us all beggars.

And with more regulation comes the concern for more legitimacy too. There is talk of revising the voting structures of the international financial institutions (such as the IMF and the World Bank) and improving their credibility and accountability. But here is a worry: the communiqué contains only talk. The giveaway is when the assembled government leaders commit, in the text, to implementing something they have already agreed at a previous summit. Why has it not been agreed already? Why does it need to be said again?

The answer is that this is a communiqué. It is not a law. Whether or not national government leaders will actually proceed to observe its terms is up to them, and not up to us. If you, as a citizen, want to hold a politician to his or her words here, there is nowhere you can go. You are disenfranchised, not only from the summit but from the whole process.

And this is not just theory, this is the practice. Take the case of world trade. Another section in the conclusions of summit restates the long-standing commitment to the Doha round of world trade negotiations and a rejection of protectionist measures, but most of the leaders who have signed up to this shared public commitment are quite willing to espouse protectionism when they get back home. Alan Beattie in the Financial Times reports on how many of the G20 participants say one thing and do another.

At present, the G20 system is probably the best method we’ve got of finding global solutions to the economic crisis. Those 20 countries (one of them is the European Union, by the way) between them represent two thirds of the world’s population, 80 per cent of its trade and 90 per cent of its GDP. They are where most of the economic power lies, but their collective meeting point does not represent a concentration of political power.

From the inability of the G20 to enforce anything, and ability of its member states to ignore or neglect their commitments when it suits them, it is clear that political power still rests in the capricious hands of the national governments. And while that remains the case, the ability of politicians to address the economic and financial crisis will remain limited, more limited than the world needs.