Is there a war on terror?

Home/Blog/Is there a war on terror?

Is there a war on terror? 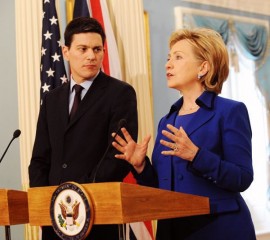 British foreign secretary David Miliband has declared, in a change to what was understood to be previous policy, that the UK is not involved in a war on terror. (Read his article in the Guardian here.)

President Bush famously introduced the term as a rallying cry for his revenge attacks on Al Qaeda after 9/11. David Miliband tries to disagree, observing that:

“The call for a “war on terror” was a call to arms, an attempt to build solidarity for a fight against a single shared enemy. But the foundation for solidarity between peoples and nations should be based not on who we are against, but on the idea of who we are and the values we share.”

It is possible to apply that precision in the wrong way, as when President Bush declared that “Either you are with us, or you are with the terrorists.” There are nuances in the approach each country takes to the problems facing the world, and to try to shoehorn each one into one category or another did not work. It is one thing to accept American leadership, but another thing to accept American hegemony. Maybe these two things look the same from Washington DC, but that is never the only way to look at the world.

Pro-American commentators have this problem too. Take Con Coughlin in the Daily Telegraph, asking “If there isn’t a war on terror, then what exactly are our boys dying for?”

There is indeed a war in Afghanistan – in fact there is a series of wars in different parts of the world – and the Islamists tell themselves that they are fighting a general war against the west. But just because they think they pose a mortal threat to our way of life does not mean that we should agree. The real threat to our way of life arising from the present conflict is if we allow it to escalate and dominate every other aspect of the way we live. No, we have to defend our peaceable and pluralist ways and not join our opponents in clamping down on our liberties. Let us remember what it is that makes us democratic. What we have to fear is fear itself.

¤ ¤ ¤
On the subject of memory, let’s return to President Bush’s speech to Congress on 20 September 2001. He declared that “America will never forget the sounds of our National Anthem playing at Buckingham Palace, on the streets of Paris, and at Berlin’s Brandenburg Gate.” And then promptly forgot.