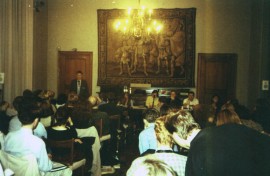 The JEF Congress in session

believe that in any society, whether of individuals or nations, peace can only be guaranteed by the rule of law;

recognise that neither a system of international relations based upon sovereign nation states nor the limited supranationality of the European Community is able adequately to deal with the problems that Europe now faces;

call for the creation of a European Union, founded upon the basic federal structure of the European Community but reformed so that it ensures effective government, acts democratically, preserves local autonomy, upholds the rights of its citizens, and welcomes new members;

demand that the existing powers and responsibilities of the European Community be more clearly defined and expanded so that the Union can take effective action when necessary;

insist that the Union’s institutions, to complement existing national democracy rather than undermine it, should establish the European Parliament as the democratic heart of the Union, thereby eliminating the democratic deficit and its uncontrolled collusion of diplomats, technocrats and bureaucrats;

reaffirm that those issues which can be managed effectively by the member states should not be adopted by the Union and that unnecessary centralisation should be opposed wherever it may occur;

urge that the rights of the individual be guaranteed, enforced and protected in the way that government decisions are both taken and implemented;

assert that the Union should seek to include all those European countries that wish to be members;

declare that the peoples of Europe, having shown how ancient enmities and hatreds can be replaced by peace and friendship, must complete their progress towards an all-European federation, and that in so doing they will set an example to the world.

The Young European Federalists (JEF) first published a Manifesto in 1977 in advance of the first direct elections to the European Parliament. During the 1980s, there were lengthy debates about how, if at all, to amend the Manifesto. The Declaration above was adopted by JEF as an attempt to condense the federalist case into one sentence.