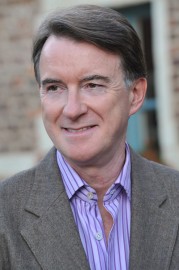 This blog discusses issues rather than personalities (Tony Benn would approve) so don’t be misled by the title. Discussion has started about who will be the member of the European Commission from Britain after 2009. Peter Mandelson, the incumbent, was appointed by Tony Blair when he was prime minister but has to contend now with Blair’s successor, Gordon Brown.

Messrs Mandelson and Brown famously fell out over the Labour leadership contest in 1994 and by all accounts cannot stand each other now. (Peter Mandelson’s contribution to the Blair leadership campaign was covered by a codename, “Bobby”.) The idea that Brown would offer to extend Mandelson’s appointment for another five years is therefore greeted with some astonishment amongst the Westminster press. The story in fact started circulating that Patricia Hewitt, another Blair loyalist and former cabinet minister who left the cabinet when Brown took over, would be nominated in Mandelson’s place.

This story has been discussed entirely in terms of personalities: who Gordon Brown does and doesn’t like. But from the point of view of this blog, that’s hopeless. The acquisition of political office – and that’s what being a member of the European Commission means – should come from the ballot box, not from attending the right cocktail parties.

The Lisbon treaty, of course, takes a big step in this direction. The choice of president of the Commission will be made “taking into account the elections to the European Parliament” (article 9D(7)) and the other members of the Commission shall be nominated by the member states “by common accord with the President-elect” (also from article 9D(7)), so it is not necessarily up to Gordon Brown to renominate Peter Mandelson or replace him with Patricia Hewitt, even if that is what he wanted to do. The voters, at long last, get a say. That’s an issue.