Nationalism and citizenship – you can’t have both

Home/Europe/Nationalism and citizenship – you can’t have both

Nationalism and citizenship – you can’t have both 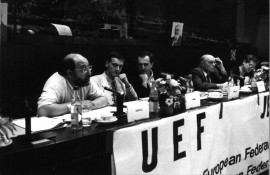 The most striking thing about the provisions for European citizenship within the treaties of the European Union is how few of them there are and how little they guarantee. The reasons for this are profound, and amount to one of the biggest obstacles that we in the federalist movement face.

What are the rights of Europeans at the moment?

The rights of individual Europeans as stated in the treaties and in European law relate principally to the right to free movement. This provision is inspired by the need to make the single market more efficient. There seems to be something faintly sordid about the idea that such a fundamental right has only been granted because it happens to suit the interests of Europe’s employers.

There is one notable exception to this – the right to vote -which will be looked at in more detail later.

It needs to be made clear that no two summaries of the rights of Europeans will agree in every detail. There is no codification of these rights, and there are many complications. For example, it has been identified that there are seven different sets of rights within the EU, each set applying to a different category of individual.

Furthermore, the European Court of Justice (ECJ) has difficulty in enforcing those rights. The practice of judicial review within the European Community is more primitive than it often is in real federations or constituted states. For example, it has applied stricter rules on the standing of litigants, that is who may bring a case to the court for a ruling.

It would not do, however, to leave such a pessimistic picture. After all, the freedom to operate a business or to receive or provide services in another member state are all examples of rights which have been greatly extended for Europeans in recent years.

As the whole concept of rights recognises, some people are in greater need than others at any one time. It is worth looking at some of those greater needs in a little more detail.

Specific problems caused by the absence of rights

The first point to make is that the idea that the EU is an area of free movement is an illusion, even in theory. The right to move freely belongs only to citizens of EU member states, and not necessarily to anyone else. Border controls in some form must still exist to prevent Australians from entering Spain without a visa, for example.

This is a particular problem to those people who were born and who have lived all their lives within the EU but are denied citizenship of a member state. For example, the children of Moroccan immigrants in Belgium are still technically Moroccan, and for them there is no free movement.

This distinction between citizens of EU member states and others can lead to racist immigration policies and procedures. At Dover, for example, British immigration officers will stop and question black people entering Britain on suspicion that they might not be entitled to move freely while letting white travellers pass unhindered. Such a practice creates scenes that might pass for Johannesburg in the 1980s.

Because the rights of free movement arise out of economic necessity, those who are not part of the labour market cannot automatically claim those rights. Although there have been recent rulings in the ECJ, the unemployed or the elderly are still not guaranteed the right to move where they wish.

Finally, there are many aspects of European decision-making over which the ECJ has no jurisdiction whatsoever. EU decisions in the fields of justice and internal affairs — including matters such as police cooperation and immigration — are taken through an intergovernmental mechanism without the input of the European Parliament and outside the scrutiny of the ECJ. The idea that law-making is outside the law is surely intolerable.

This is just a summary of a bad position which may be expected to get worse. The pressures of technological and commercial development will only increase the number of matters where national solutions are ineffective and decision-making at the European level is necessary. At present, the safeguards of citizens are inadequate for such change.

Why these rights are denied

The traditional concept of the legitimacy of a state requires that it bestows rights on its citizens. This is the privilege they receive in return for their allegiance and obedience to the institutions of the state. If those rights start to come from somewhere else, the very legitimacy of the state is thrown into question.

Within the European Union, obviously, national states are now being questioned on exactly this point. If the developing Union can provide for so many of our basic political needs, what are the member states for?

Not surprisingly, those member states are most unwilling to see this line of questioning go further.

This is why there is such an anomaly in the Maastricht Treaty regarding the right to vote. An EU citizen may vote in local and European elections if resident in another member state, but not national elections. While granting an extension of the rights of their citizens, there was a limit to what the member states were prepared to concede. The idea that a national parliament should not be permitted to define who may and may not vote in its elections was one that was a step too far.

The proposals of the federalist movement

Recognising that it will not be possible to build a democratic political entity without a foundation of political rights for its citizens, the UEF last October adopted six points in its proposals for the 1996 IGC specifically to address this aspect of the democratic deficit.

1.         The European Union should become a party to the European Convention on Human Rights and Fundamental Freedoms and should incorporate its provisions into Union law, pending the adoption in the constitution of the Union’s own bill of rights.

2.         Union citizens’ rights should be further guaranteed by the addition of the words “sex, age, race, colour, sexual orientation, political conviction or religious belief” after the word “nationality” in Article 7 EC, which prohibits discrimination within the scope of application of the EC Treaty, and Article 48.2, which guarantees the free movement of workers within the Community.

3.         The European Union should also provide that every citizen shall have the right to express, preserve and develop in complete freedom his/her national, religious, ethnic, linguistic and cultural identity and enjoy this right individually or in association with others equally under the law, provided that no such rights shall infringe equivalent rights of other persons or groups.

4.         The Treaty should guarantee the rights under points 2 and 3 above to all persons legally and permanently resident in the Union.

5.         All citizens are free to express their membership of a national minority. This does not release the citizen from civic obligations. The cultural identity and the rights of national and ethnic minorities must be protected by the state and local authorities and necessary support should be provided.

6.         The Union cannot long survive unless its citizens respect its laws, support its institutions and feel sufficient solidarity with the Union and with each other. In order to make clear the moral basis for this, the Union should draw up a Declaration of European Citizenship, to be annexed to the Treaty, affirming its fundamental values, principles and purposes, to serve as a guide both for the citizens and for the education policies of the Union and the member states.

Furthermore, the UEF reaffirmed fundamental demand that the policies devised and implemented by the institutions of the Union should be founded on the democratically—expressed will of the voters; this is perhaps the most basic right of all.

Finally, the three pillar structure which keeps so many vital decisions away from democratic politics and the rule of law should be abolished, with all decisions subject to the same standards of control and scrutiny based on a development of the present European Community pillar.

Finally, it is worth reflecting on what would be the consequences of the creation of full European citizenship. The existing concept of nationality would lose most, if not all, of its political content — there is no Texan nor Californian nation — and become a predominantly cultural matter. This is after all how it used to be.

The innovation of regulating the relations between states through democratic and shared institutions leads inevitably to a new form of relationship between the individual and the state. The success of supranational democracy depends on the effectiveness of this relationship with the individual.

This article was written by Richard Laming for JEF in preparation for the 1996 IGC that led to the Treaty of Amsterdam. The opinions expressed are those of the author and not necessarily those of Federal Union or JEF.