No globalisation without representation

No globalisation without representation 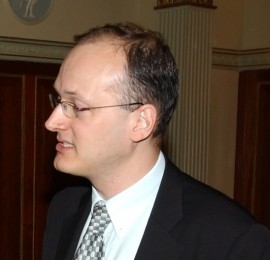 That the protestors outside St Paul’s cathedral are critical of global capitalism should not be surprise.  Doesn’t everybody object to the way in which what was effectively gambling in unregulated markets nearly brought down the financial system and has ground economic growth to a halt?

If confidence is to be restored in the economy, bringing back jobs and improved living standards, and the public finances put back on a sound footing, our attitude towards the banks and the financial markets is going to have to change.  New regulation will be needed to restrain their more risky impulses and protect the wider economy from the threat of systemic collapse.

But it is not sufficient to will the ends, it is also necessary to provide the means.  Why has such regulation been absent in the past?  It is because economic and business life has gone global, but its regulatory and political equivalent has not.

This is the basis for objecting to the current institutions of global governance.  It is not that those institutions are misconceived, but that they are incomplete.  This is the meaning of the demands for global democracy on the banners outside St Paul’s.

It is not wrong for bankers to be greedy: it is part of their job description.  What is wrong is for the regulation of bankers to permit and even encourage greed to imperil the health of the banks themselves.  Banks can be their own worst enemies, and we have discovered that they cannot be relied upon to regulate themselves.  The financial crash has revealed the need for a new rule book, and the interdependence of the financial markets shows how that rule book needs to be global in its scope.

The institutions of global governance are incomplete in that they are not yet effective enough.

But if they are to take a larger role in regulating the economy and thus acquire a greater influence over our daily lives, they also need to become more democratic, more transparent and more accountable.

The decisions they take are increasingly analogous to those of our national governments, in which case so should their mechanisms of accountability and legitimacy.  In fact, given that they will necessarily be more distant from the citizen, those mechanisms are if anything more important, not less.

A succession of international summits, bringing together heads of government behind closed doors, has proved to be a system in thrall to the interests of precisely those interests that need to be restrained.

But if those are the problems, what can be done?  There are several possibilities for reform.

Here in the UK, the historic link between wealth and the franchise was abandoned in 1918.  If the connection between money and the right to vote has been severed in elections to the House of Commons, why do we still tolerate it at the World Bank?

Then there is the control of public spending.  The money for IMF bailouts is pledged by national governments, but they are drawing on public funds provided ultimately by taxpayers.  National parliaments may be invited afterwards to endorse what their respective governments have committed, not to comment on the strategy but to rubberstamp an agreement that has already been made.

The principle that public spending should not be at the discretion of the executive alone was at the heart of the debates about Ship Money in the 1630s.  Why do we still not insist on it at the IMF?

And when we have our global institutions, who should run them?  After the resignation of Dominique Strauss-Khan from the IMF, there was much discussion of the policy significance of who his successor as managing director might be.  Would there be more or less international support for the eurozone in its difficulties?  Much discussion everywhere, that is, except among the people we have elected.

The Americans appoint their ambassadors and the Europeans, their members of the European Commission, after open parliamentary hearings and scrutiny.  The officials that run our global institutions could be subject to a similar public grilling.  Why do we not do that at the United Nations?

The cry is often heard that globalisation is weakening of our national systems of democracy, but it is the half-built system of global governance that is doing the weakening.  National governments and parliaments have lost powers, and their voting publics want them back.

One way to do this would be to walk away from globalisation altogether, in a return to the half-remembered days of the 19th century.  But that would mean definitively turning our back on trade and prosperity and leaving our present environmental threats to do their worst.

Another is to take those principles of representative democracy we value domestically and bring them to the global level.  International institutions should be under as firm a grip of transparency and accountability as their national equivalents.  Decisions taken by people in power – and the decisions who to put there in the first place – should be open to public scrutiny.  Just as surely as at national level, these decisions are spending taxpayers’ money.

It has been a long process to create the national systems of democracy we know today, as the countries of the Arab Spring will find for themselves, but that is no reason for them not to start.  It will be an even longer journey to reach anything deserving the description of global democracy, but the proposals I have suggested are a place to start.

John Bright famously declared that England was the Mother of Parliaments.  She would be failing in her maternal duty now if she did not support the parliamentary idea on the largest scale of all.