Not just who but how

Home/Blog, World/Not just who but how

Not just who but how 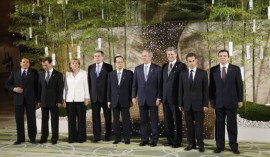 Claire Melamed, head of policy at ActionAid, writes in the Guardian today about the G8 summit to be held in Italy this week and whether it would be better if it were the G20 represented instead. (Read the article here.)

She discusses whether the G20 would be 2 and a half times as democratic as the G8, and acknowledges that “it’s still not exactly a bastion of democracy”. Many countries are still on the outside, and they need some kind of guarantee about what will happen.

“From the point of view of the countries outside the room, the difference between the G8 and the G20 might seem a little academic. What they need is a group that will keep its promises. Whether on aid or on climate change or on tax havens, what the poorest countries need is for the richest countries – however they organise themselves – to make the right choices and then stick to them.”

This is both right and wrong. It is wrong in that the poor countries should not be left waiting on the decisions of the rich. The property qualification for the right to vote in elections to Westminster was abolished in the 19th century: why should there be a property qualification applied within global governance. What the poor countries need is the right to be involved in those summits themselves. (Of course, the involvement of so many more countries in the business of international decision-making will force a rethink of how those decisions are taken, but that is a good thing, not a bad one.)

It is right in saying that the decisions of international summits need to become reliable. At present, they are merely political statements. They need to become legally enforceable. That way, the poor countries of the world can get what they are owed, and the rich countries will have to keep their promises. Perhaps that will lead only to a toned down rhetoric on behalf of the rich, but more honesty on their part would in itself be a good thing.

Because of their composition and their methods, the principal beneficiaries of summits are the people who attend them. That has got to be wrong.