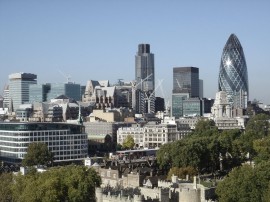 The City of London

The truth is that the Commission acts collegiately, and has to get its legislation approved by both the Council of Ministers and the European Parliament. The nationality of the Commissioner with the financial services portfolio is a rather minor consideration, but notions of collegiality and balance play rather poorly in the national newspapers when it comes to Europe.
A more considered view of what to do with the City was presented at the launch of a new book, yesterday: “Reforming the City”, edited by Sam Whimster. (You can order the book here.) A number of the issues covered in the debate are outside the scope of this blog – the judgement of when enough financial stimulus to get the economy out of recession becomes too much stimulus in that it debauches the currency, for example, or the proposal to distinguish between narrow banking and the casino – but there were some issues about which federalism has something to say.
First, there is the realisation that a globalised economy needs globalised regulation. There must be no exceptions to this, otherwise mobile capital will go to wherever the regulation is absent. A bucket only needs one hole in it to be useless. This implies that tax havens need to be brought to order, given that fraudulent funds thrive on a lack of regulation and can do substantial harm to the legitimate economy.
The second point arises from a mismatch of levels. Federalism proposes that there should be different levels of regulation to deal with different kinds of problem, with the level matched to the problem. What we have seen lately is that banking losses have been accumulated around the world by British banks but that they turn to the British taxpayer alone when they need to be bailed out. Why should a country of 60 million people be expected – or expect – to provide financial or banking stability for the world as a whole? The British national strategy of hosting the world’s financial services centre makes greater demands on the national finances than can easily be borne.
The third point relates to the British constitution, and specifically the over-dominance of London within the UK. The British economy has been allowed to become lop-sided because the economic interests of the capital city have lacked counter-balance from the rest of the country. A federal UK would possess alternative sources of political and economic power that might restrict the ability of a single location or a single industry to distort or take over the national economic interest as a whole.
¤ ¤ ¤
I gave a talk at Ventotene this year on federalism and the financial and economic crisis which you can read here.