Frits Bolkestein: Support for Turkish accession to EU would lead to a 40-member Union and to its fatal dilution

Home/Quotebank/Frits Bolkestein: Support for Turkish accession to EU would lead to a 40-member Union and to its fatal dilution

Frits Bolkestein: Support for Turkish accession to EU would lead to a 40-member Union and to its fatal dilution 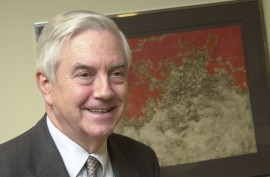 Published in the Financial Times, 27 November 2007

Sir, The most important argument against Turkey’s accession to the European Union is that it will lead to that of Ukraine, in the wake of which will come Belarus and Moldova, perhaps even Georgia, Armenia and Azerbaijan.

Together with the countries of the western Balkans this would result in an EU of more than 40 member states. The EU would be fatally diluted. It would be little more than a free-trade area, if that.

Two countries have always militated in favour of the accession of Turkey: the US and the UK. The US takes this position for reasons of geopolitics, even though the Turks have not exactly been helpful in the US-led war against Iraq. Mexico joining the US may well be compared with Turkey joining the EU. The US is now building a wall to keep out unwanted Mexican immigrants.

Why is the UK so enthusiastic about Turkey’s accession? Cynics say: “Because it wants to dilute the EU, which it has never liked.” Is this allegation true or is it slander?

Now we know the answer. On November 15 David Miliband, the UK foreign secretary, gave a speech at the fateful place of Bruges, Belgium. It was on Europe in the year 2030. Mr Miliband’s priority was enlargement. He wanted to take the European Neighbourhood Policy, which now concerns only non-members, a step further.

He said: “We must clearly state that participation [in the ENP] is not an alternative to membership or a waiting room.” For good measure he went on to say: “The goal must be a multilateral free trade zone … that could gradually bring the countries of the Maghreb, the Middle East and eastern Europe in line with the single market, not as an alternative to membership but potentially as a step towards it (emphasis added).