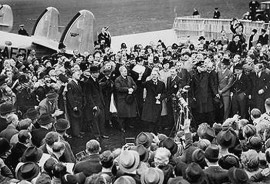 One of the first things I learned about the etiquette of debating politics on the internet was that the first person to mention Hitler is deemed to have lost the argument. When you think about the kind of debates that go on, you can see the sense in it. Look at the some of the comments on this blog, for example.

Where this rule breaks down is if we are discussing the issues of peace and war and the lessons of the 1930s and 1940s. It is hard to have a meaningful conversation about these questions without mentioning the H word.

The debate about intergovernmentalism versus supranationalism, in the wake of Margot Wallström’s speech in Terezin last week, is a perfect example of the kind. (You can read it here.)

Back in the 1930s, international relations in Europe were conducted on a purely intergovernmental basis. The only people involved were the heads of government meeting and talking at their summit meetings. There was even the invention of shuttle diplomacy when Neville Chamberlain flew to Bad Godesberg.

As Herbert N Casson wrote in his book “Post-Hitler Europe” in 1939:

“The big fact to notice is that Mr Neville Chamberlain has started a new method of securing cooperation between nations – Conferences between the Heads of these nations This has proved quick and effective, and as every intelligent person can see, it has at once rendered the League of Nations obsolete.”

Indeed it did render the League obsolete, but not in the way that Herbert Casson supposed.

The settlement at the end of the second world war was very different to its predecessor Versailles. It led to supranational institutions, not only intergovernmental ones, to protect the common interest and to represent the citizens directly. That way, countries are knitted together much more effectively than if the only political contacts are those between government leaders.

Compare the experience of the past fifty years in Europe with the previous fifty years to see the difference that supranationalism has made. Let’s be grateful.

This blog entry first appeared on www.yes-campaign.net. The opinions expressed are those of the author and not necessarily those of Federal Union or of the Yes campaign.