Symbol of a closed order

Home/Blog, Europe/Symbol of a closed order

Symbol of a closed order 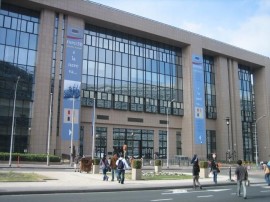 A news story in EUobserver last week on the plans for a new building for the Council of Ministers reminded me of the issues we raised the last time the Council moved to a new building. (Read the EUobserver story here.) That was in 1995, when the number of member states had just jumped from 12 to 15 and the programme to create the single market had created a great deal more legislative work to be done. However, in those days, the attachment of the Council to secretive working practices was much more far-reaching than it is now. The Financial Times published the following letter from me (on 31 May 1995):

“Sir, On Monday, the Council of Ministers opened a new headquarters building. Built at vast expense on a prime site in the centre of Brussels, you might expect that provision has been made so that we can see what is being done in our name and with our money. But you would be wrong.

“The council still normally meets in secret, allowing the public to watch only the occasional formality.

“Times have moved on. The European institutions these days make law. Their decisions affect every one of us. It is inevitable that those institutions will be unpopular when they insist on following the rituals of diplomacy rather than democratic practices.

“The new council building is a symptom of this. We will be told that the building symbolises the new forms of decision-making within the union: no, it still symbolises the old style. The building may now be open, but the council itself is not.”

A similar complaint pertains regarding the new building today, but not to the same degree. (Read about it here.) And the Lisbon treaty would, if ratified, take a further step towards fixing it. But it still remains the case that the Council is not as open as the European Parliament, even when doing the same job, i.e. debating, amending and adopting legislation. (You can read an analysis of the differences here.)