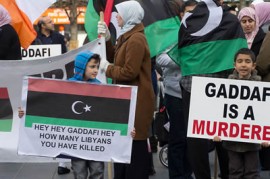 I listened to Green MP Caroline Lucas on the radio today explaining why she had voted against the resolution in the House of Commons endorsing military action in Libya.  She supported the no fly zone, she said, but objected to the fact that the UN Security Council resolution permitted more wide-ranging military action than that and amounted to taking sides.

But to create a no fly zone is to take sides.  If one side in a conflict is more abundantly equipped with air power than the other, to take air power out of the equation is to favour the side with less.

Furthermore, the point of the no fly zone was to prevent massacres of civilians from the air.  Where is the humanitarian purpose in preventing planes from being used to kill civilians but permitting tanks and artillery to do the job instead?  The reason why a no fly zone appeals to outsiders as a policy is not because it is effective but because it is easy.  It puts fewer of our servicemen and women at risk, but should our convenience be the deciding factor in choosing whether and how to pursue humanitarian goals?

And, in any case, to pursue a humanitarian goal in Libya amounts to taking sides.  One side has declared that it wants to massacre its opponents, showing no mercy.  A humanitarian goal that prevents that side from achieving its objectives will necessarily be partisan.

But why should we not take sides in Libya?  The existing government has routinely and extensively killed and brutalised its opponents.  More than a thousand prisoners were killed at Abu Salim prison in Tripoli in 1996.  A French civilian airliner was blown up by Libyan intelligence agents in September 1989, killing 171 passengers and crew.  I don’t even need to mention Lockerbie.

But what of the argument that Libya is a foreign country and what happens there is none of our business?  It should be no surprise to visitors to this website when I write that being foreign is no reason to be ignored.  A massacre is a massacre, an airliner is an airliner.  And there were four British people on that French plane.

And will Caroline Lucas say that it does not matter to her that the Greens will now lead the state government in Baden-Württemberg after the elections there last Sunday?  It’s a foreign country, but we’re entitled to prefer one side to another nevertheless.

If there are reasons not to support the government’s action in Libya, it is not for fear of taking sides in a foreign dispute.  We are entitled to be doubtful about what kind of action is now underway.  Armed forces minister Nick Harvey’s answer to the question of how long the action might take was “How long is a piece of string?”  That surely is alarming.  The same can basically be said of the intervention in Afghanistan, too, and British troops were only withdrawn from Iraq after having been beaten in Basra and shown not to be useful there.  We don’t want a third, open-ended military commitment.

And I wrote confidently that one side blows up airliners and the other side doesn’t.  But how can I be sure of that?  What do we know about the rebels in Libya?  They are opposed to Gaddafi, obviously, which is a good thing, obviously, but what are they in favour of?  Should British servicemen and women be risking their lives on their behalf?

These are the reasons to be careful about taking sides, not a simple dislike of taking action if action needs to be taken.