The death of Osama Bin Laden

The death of Osama Bin Laden 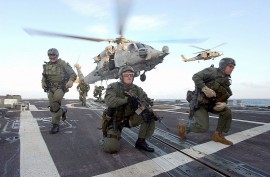 Quakers are enjoined to see “that of God in everyone”, but it must be hard to see it in the person of Osama Bin Laden.  A terrorist and a mass murderer, he was behind the deaths of thousands of innocents: this website can find more deserving causes for its sympathy.

But yet, what does the arrival of American military helicopters in the middle of the night have to do with the rule of law?  Shouldn’t every criminal be brought to trial, rather than summary execution?  This website has published a description by Geoffrey Robertson QC of how, in the case of Osama Bin Laden, this might be done (read it here.)

The argument that Pakistani national sovereignty was violated by the American action to send Navy Seals to Abbottabad is easily disposed of.  Pakistan’s own law enforcement agencies could not be trusted not to tip off Bin Laden that the Americans were on to him – perhaps he had been protected by them all along.  The reliance on national cooperation to enforce the criminal law across borders depends on the sincere participation of the police in each country.  Where a country will not or cannot provide that sincere participation, the duty to enforce the law must fall on other shoulders instead.  The alternative is that the law is simply not enforced at all, an outcome that national borders should not be allowed to deliver.

It would have been better if Osama Bin Laden had been brought to trial rather than shot dead in his own home.  The difficulties of arresting and prosecuting him stand testament to how far we really are from an international rule of law.  The outpouring of support for America after the attacks on New York and Washington DC on 11 September 2001 could have been used as an occasion to take a step forward in the direction of law and justice.  Instead, America resorted to the lynch mob.  What a missed opportunity.