The death of Saddam Hussein

The death of Saddam Hussein 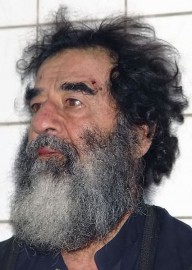 Saddam Hussein shortly after his capture (picture US Department of Defense)

I am not going to say anything about the death penalty in the case of Saddam Hussein – plenty of other people have already done so, and no-one better than Michael Hammer of the One World Trust (read his analysis here). I am more interested in the trial that led up to it.

The choice of an Iraqi court rather than an international one is telling. One of the major reasons put forward by advocates of invasion was that Saddam Hussein was a threat to the entire region: he had invaded two neighbouring countries and fired rockets at at least two others. However, the choice of an Iraqi court precluded those incidents being brought to justice. Kuwaitis who suffered during the occupation will have to enjoy the vicarious justice from Baghdad rather than any real justice of their own.

As Margaret Beckett said, Saddam Hussein has been held to account, but only partially.

The next significant feature of the trial was that the procedures were novel and rather strange. The case got through six judges, members of the defence legal team were assassinated and threatened throughout. The manner of the execution was in some senses a continuation of this.

But any “political” trial will be peculiar; indeed, one could go further and say that any trial of a famous person is going to be odd. Remember the difficulty of finding a jury that could sit in judgement of Michael Jackson.

John Laughland, a noted souverainist, raised this point in the Guardian. But the answer is clear.

If the problem is that the procedures were novel, let’s make them routine. Lift the burden from individual courtrooms and move major trials to a dedicated facility. The trial of a former head of state such as Saddam Hussein or Slobodan Milosevic needs to be normalised as much as possible. That way, people in those positions will come to learn that, like the rest of us, they are subject to the law.