The end of the coalition

Home/Blog/The end of the coalition

The end of the coalition 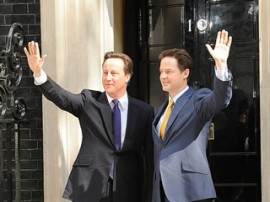 David Cameron and Nick Clegg: together for how much longer?

The results of the voting that took place on 3 May surely spell the beginning of the end for Britain’s coalition government.  (Read about the election results here.)  I am not referring to the victory for Labour and defeat for the coalition parties (with an equivalent national vote share of Lab 38, Con 31, Lib Dem 16), nor to the reaction within the Tory party to that vote share, namely calls for more right-wing policies that the Liberal Democrats could never expect.

More significant, I think, is the rejection in referendums of the proposal for city mayors.  One of the Conservative contributions to the coalition programme for government was the idea that major English cities should be led by directly-elected mayors rather than having the council leader chosen by a majority of the councillors.  This would increase popular interest in local government and strengthen local democracy.  “A Boris in every city”, said David Cameron.

But, in the nine referendums that were held, eight voted No.  Only in Bristol was there a Yes vote.  The radical reforming Conservative decentralising dream appears to have stopped before it even started.

And this is why the coalition will shortly be over.  What is there left for the Liberal Democrats to hope for?

The starting point for the coalition was to address the urgent and difficult question of the deficit, to prevent Britain from turning into Greece and losing access to the financial markets.  Leave aside whether that was a real threat in 2010, it is not a real threat now.  The more serious economic threats to the UK now are (1) a collapse of the eurozone and (2) the lack of growth in the UK.  The Liberal Democrats and Conservatives do not agree about how to deal with either of those two issues.  The Tories would take the collapse of the eurozone as an opportunity to the leave the EU altogether, which the Liberal Democrats would not accept, and the Conservative recipe for more growth is to cut regulation and public expenditure whereas the Liberal Democrats prefer an industrial policy and selective reflation.

The major legislative proposals to come from the coalition are now in law: Andrew Lansley’s reform of the health service, Michael Gove’s break-up of the state education system, and Iain Duncan Smith’s attempt to get people off welfare and back into work.  What is left is the managerial delivery of these policies and not more law on the subject.

The outstanding issue is constitutional reform, and there the Liberal Democrats will be disappointed.  That is the lesson of the voting on 3 May.

The British constitution is quite hard to change, quite properly, and those changes that have been made have been thoroughly prepared over many years and based on a considerable degree of cross-party support.  Devolution, the Human Rights Act, and even membership of the EEC in the early 1970s: these did not spring from nowhere but had been painstakingly prepared.

By contrast, the regional government referendum in the north east in 2004, the referendum on electoral reform last year, and now the creation of more mayors were all foisted upon an uninformed and ultimately unwilling electorate and therefore rejected.  None of these was as important to the public as it seemed to be to the political class.  Reform of the House of Lords will go the same way.

There is no cross-party consensus on how the second chamber should be reformed, neither in terms of powers nor in terms of composition.  Trying to change the second of these without thinking about the first is meaningless: those powers would probably change anyway as an elected body would expect to exercise more power than a previously appointed one had.  And trying to change the two together implies a more far-reaching approach to the whole question of the UK is governed than has remotely been considered so far.

The fact that all three party manifestoes at the last general election contained reference to a reformed and/or elected upper house is now history.  We learned from the referendum on electoral reform that putting support for AV in the manifesto did not mean that Labour MPs felt obliged to support it themselves.  There are plenty of reasons for Labour now to stop the Liberal Democrats trying to reform, the House of Lords, even if Labour would like to reform it too.

What this means is that there is little left for the Liberal Democrats to do in government.  They can assist in the managerial delivery of domestic policy reforms that they did not support, they can help administer an economic policy that is not what they really want, and they can waste a lot of time on a constitutional reform that has not been properly prepared.  And they may well do all these things, consoling themselves that these policies would be done even worse if left to the Conservatives alone.

But if the crisis in the eurozone suddenly gets a lot worse, for example in relation to Greece, then the Lib Dem calculation of what is in the national interest might turn out rather different.