The fate of political parties

The fate of political parties 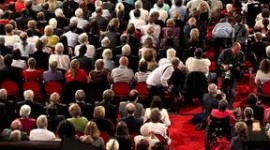 Delegates at a party conference - a dying breed?

At the end of the political party conference season, it is time for a review of our political parties.  There is dissatisfaction all round.

Here is Peter Oborne, at the Conservative party conference for the Daily Telegraph:

the failure to fill the seats in the auditorium for David Cameron’s speech was a notable moment in political history. It is the first time such a shortfall has occurred in living memory, and points to one of the most intractable problems in British politics. The empty seats in the audience were the result of the hollowing out of our party system.

Politics is increasingly the preserve of the professional and the specialist.  There is less space for the amateur and the enthusiast.  This seems to be the trend in many walks of life, as the availability of information increases the knowledge about how to do things better and the availability of affluence makes doing things better, possible.  Think about the extremes of preparation that the England cricket team goes to these days, for example.  It is no longer enough just to turn up and be brilliant, Ian Botham-style.  Achievement requires meticulous care and attention.

And it is not just the Conservatives.  Jonathan Calder writes in the Guardian about the Liberal Democrats’ new security arrangements:

the idea that any party can leave it until a few days before the conference to tell people whether or not they will be permitted to attend is absurd.  If activists are treated like this, and also face security precautions that make attending conference the equivalent of taking a transatlantic flight, many will drift away from the political process.

In the conflict between democratic participatory politics and modern life, modern life appears to be winning.  But I am not sure that is a good thing.  The right to vote has a different moral significance from the right to spend money, and the ways in which people are encouraged or induced to do the former should not necessarily be the same as are used in commercial circumstances.  The role of the amateur, the citizen, needs to be preserved in politics, even if the marketing professionals find that inconvenient.

This is a lesson for British politics, but it is even more a lesson for European politics.  One of the weaknesses of larger political entities is that decision-making is further from the citizen (which is one of the reasons why federalism tries to minimise the amount of centralisation), and thus the EU is even more at risk of hollowing out than the United Kingdom.  Active, engaged political parties are therefore a necessity for the EU, too, but they still might not be the whole answer.

Perhaps our notion of liberal democracy has to adapt to modern life, too, and the role of political parties has to be acknowledged to be in decline.  If this is the case, something new needs to be born to replace the role of the political party in maintaining the link between the citizens and the decision-makers.

The critics of the EU are wrong in claiming that it is qualitatively different from the member states, in this respect.  No, it is simply a more visible example of a phenomenon that is affecting them all.  This is no time for complacency about national political systems, either.