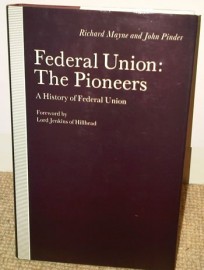 Britain’s relationship with its European Community partners has been bedevilled by divergent views about the aim of a political union with federal institutions. Federalism is often depicted in Britain as an alien concept with which the British cannot come to terms. Federal Union: The Pioneers shows this view to be false.

Between 1938 and 1940 the British were the leaders in promoting the federal idea. Initiated by three young men, the organisation known as Federal Union rapidly gained both elite and mass support, and attracted some of the best brains in the country to develop thinking about political organisation along federal lines. Following the rejection of Churchill’s offer of Union to France, it was the course of the war that diverted the British from the idea of a federal Europe, which was at the same time taking root in the Resistance movements on the Continent.

This book shows how Federal Union achieved its originality and strength; how its literature inspired a small group in the Italian Resistance who became founders of the European federal movement; how this movement influenced the building of the present European Community; how a small group of British federalists carried the ideas of Federal Union’s founders into their successful campaign for British membership of the Community-while others worked to strengthen Atlantic and world institutions; how the British federalists contributed to thinking about the Community’s further development; and how their work continued in the 1980s, in the context of the Single European Act and the prospect that it will be followed by an even wider European Union in the 1990s.

Richard Mayne is co-editor of Encounter and a regular broadcaster and writer. A longstanding member of the Council of the Royal Institute of International Affairs, he is also a Council member of the Federal Trust for Education and Research. He was for a number of years a personal assistant to the late Jean Monnet, whose Memoirs he translated into English, winning the Scott-Moncrieff Prize. In addition to university teaching in Britain and the United States, he has also served as a senior official of the European Communities in Luxembourg, Brussels, Paris and London. He is the author of a number of books on contemporary European history, including The Recovery of Europe and Postwar.

John Pinder is a Visiting Professor at the College of Europe in Bruges, where he was formerly head of the economics department. He has taught in universities in five European countries, and has been Chairman of the Federal Union Executive Committee, Vice-President of the International European Movement, President of the European Union of Federalists, and is now Chairman of the Federal Trust. His publications include many books and articles on the European Community, East-West relations, international economics and the history of federalism.