The worst day in history

The worst day in history 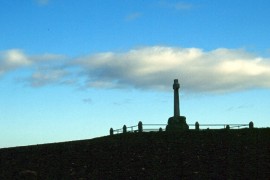 Today is the 500th anniversary of the Battle of Flodden, when the invading army led by James IV of Scotland into England met with disaster on the Northumbrian fells.  A better armed and better led English force triumphed on the day, the last major battle between England and Scotland.  The Yes campaign in the Scottish referendum likes to talk about the Scottish victory at Bannockburn in 1314 – the referendum itself will be held 700 years later – but Flodden, not so much.

Medieval battles were gruesome affairs: a lack of modern medicine meant that many injuries that would be survivable now were fatal then.  (The experience of British and American casualities in Iraq provides a stark contrast.)  But the numbers at Flodden mean that it is no exaggeration to describe that battle as the worst day in Scottish history.  Casualties of around 12,000 out of a population of perhaps 800,000 mean that 1.5 per cent of the population of the Scotland died in a single day.  That makes it, relatively speaking, 10 times worse than the bombing of Hiroshima was for Japan or 30 times worse than the first day of the battle of the Somme for Britain.  (The corresponding worst day in English history was 29 March 1461, the battle of Towton in the Wars of the Roses, where the 28,000 casualties represented 1 per cent of the population at the time.)

If Flodden is truly the worst day in Scottish history, why the relative silence?  This website was set up on the conviction that states, each claiming the right to settle their disputes however they see fit, will inevitably fight each other.  The rule of law is the central principle that keeps us from such a fate today.  In this light, battles lost are just as instructive as battles won.

An independent Scotland that took its place as a member of the EU and a member of the UN would, of course, not end up fighting England.  But it is necessary to think about relations between countries and peoples when things go badly as well as when they go well.  How much do Scotland and England still need each other?  That’s a suitable reflection on a sad anniversary such as this.