Thomas Paine, from “Rights of Man”

Home/Quotebank/Thomas Paine, from “Rights of Man”

Thomas Paine, from “Rights of Man” 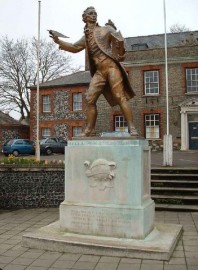 “If there is a country in the world, where concord, according to common calculations, would be least expected, it is America. Made up, as it is, of people from different nations, accustomed to different forms and habits of government, speaking different languages, and more different in their modes of worship, it would appear that the union of such a people was impracticable. But by the simple operation of constructing a Government on the principles of society and the rights of man, every difficulty retires, and all the parts are brought into cordial unison. There the poor are not oppressed, the rich are not privileged. Industry is not mortified. Their taxes are few, because their government is just; and as there is nothing to render them wretched, there is nothing to engender riots and tumults.”