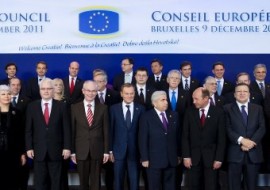 The European Council meeting a week ago was convened with the aim of saving the euro.  Agreement was reached at the meeting about a way forward for the EU, even if the UK (and perhaps some others) will not travel with the rest.  But despite a successful meeting, and the euro having survived another seven days, there remain three ways in which the European currency is under mortal threat.

The first is that the public finances of one of the member states of the eurozone are simply overwhelmed by debt.  The Greek government has debts amounting to 142 per cent of Greek GDP, the Portuguese government owes 93 per cent of Portuguese GDP, and the debts of the Irish government are 96 of Irish GDP.  Each of these is a large sum of money, a sum of money that has regularly to be refreshed.  It consists of short-term loans that have to be repaid when the loans expire, the money for repayment being found by raising new loans.  If the market refuses to provide the funds for the new loans, for fear of default, then default will likely follow.

However, the European Union has foreseen this problem and acted to prevent it in the case of Greece, Portugal or Ireland by created the European Financial Stability Facility (EFSF), a fund of EUR 440 billion which can lend, and is lending, to countries in need.  Those three countries are therefore probably safe from a short-term collapse.

Meanwhile, there are other, larger countries with much larger debts that the markets are also doubtful about.  The Italian government owes 120 per cent of Italian GDP, or EUR 1.8 trillion, and the government of Spain has debts of 61 per cent of Spanish GDP, or EUR 640 billion.  Those sums together are larger than the EFSF or the European Stability Mechanism (ESM), its successor from 2013, can currently provide.  If confidence in the ability of eurozone governments to repay their debts continues to decline, then the euro itself might not survive.

A national government unable to borrow enough money would be unable to maintain its essential public services.  To keep schools and hospitals open would require the repudiation, in some form, of existing debts and the issuance of some new form of currency to pay ongoing domestic bills.  That would, of course, lead to a country leaving the euro in a chaotic and uncontrolled manner.  Fear of default would spread to the creditors of other weak eurozone members, who would call in their loans and it is hard to imagine that default could be contained to a single country.  The resulting crisis would cripple the European economy: even those countries in good economic shape (or not in the euro at all, like the UK) are heavily dependent on trade with the rest.  No-one would get away unscathed.

The prospect of this calamity has kept the European governments together, despite all the temptations for each of them to try to save themselves at the expense of the others.  They have therefore agreed to write a substantial new treaty with far-reaching restrictions on how national governments manage their public finances.  Limits for borrowing will be introduced, and the European Commission will be tasked with policing those limits and imposing punishments on those that do not comply.  National sovereignty in the field of tax and spending will be severely limited.  This is a lot to ask.

The new treaty cannot be ratified

The new treaty, with these new restrictions on decisions about public spending, making it illegal for a government to try to reflate its own economy, exists at present as no more than a plan.  There will be negotiations over the next three months to turn it into a legally workable form, and if that can be agreed, then it will have to be ratified in every one of the participating EU member states.  This might be as many as 26 countries, not including the UK, of course.

Agreeing the new treaty will be hard – which government wants to give up its hard-won powers over public spending and taxation? – and ratifying it will be even harder.  It will require changes to national constitutions in most of the member states, and changing constitutions is not easy.  Often, it will require the support not only of the governing party or parties, but also the principal opposition parties.  They might have ideological or tactical reasons to object.  In some countries, such as Ireland, there will have to be a referendum as well.  And we all know how unpredictable referendums on European questions can be.  Add to that unpredictability, the realisation that the new treaty introduces substantial new constraints on national politics.  Ratification will be doubly difficult.

At the time of the ratification of previous treaties, there has been a positive and attractive vista painted of what that new treaty will bring.  A single market!  A new currency!  Better cooperation on justice and internal affairs or foreign policy.  But this time?  To avoid the disaster that might result from default and eurozone collapse.  Not the most attractive grounds on which to fight for public opinion.

If the new treaty cannot be agreed, or if ratification fails, the euro is then imperilled.  The countries that are currently offering the emergency loans are doing so on a short-term basis.  This new treaty is intended, over time, to relieve the pressure on national governments in the markets and enable them to start borrowing again on their own account.  But without a new treaty, the governments that are offering loans will find themselves with an unlimited and open-ended commitment.  The German constitutional court has ruled that Germany cannot take on such an obligation, and the voters in many other member states would no doubt reach the same conclusion.

The only way the eurozone can be kept going, with the wolves of default kept from the door, is if the emergency lenders can be persuaded to continue for a while longer, but they will only do so if there is an end in sight.  Without a strategy for relieving the lenders of their burden, they will choose to drop it themselves.

The treaty is ratified but does not work

And if the first problem is caused by trying to keep to the new rules, the second problem will be caused by actually keeping to them.

The countries with large public debts can only generate the revenue to pay off those debts by growing their economies.  However, an economic strategy of keeping public borrowing low risks doing the opposite.  The austerity policies being followed in many European countries at present reduce the role of the government in the economy and thus suppress demand and with it shrink the overall size of the economy.

However, if those people in the public sector are being kept in their jobs simply by virtue of borrowing, we have a different unsustainable economic strategy.  That is how we arrived in this position in the first place.  The way out is a judicious mix of both borrowing and cuts, the exact mix depending on circumstances, and neither being relied upon as the sole source of economic salvation.

The danger is that that is not what’s planned for the new treaty.  The emphasis is very heavily on cuts rather than borrowing; the bias is towards deflation and the scope for governments to act to counterbalance the economic cycle will be reduced.  The prospect is one of economic stagnation rather than growth.

Will the electorates of countries in depression accept continued austerity in order to meet the terms of the EU treaty?  Will lenders to the governments of those countries continue to lend if they see the debt/GDP ratio continuing to rise, not because debt is rising but because GDP is falling?  These are not the broad, sunlit uplands that Europe was once offered.  Is it worth saving the euro for this?

The euro is worth saving

Efforts to save the euro are worth preserving with, for two reasons.  First, because the immediate consequences of failure are so serious.  That realisation should concentrate the minds of the politicians who have to reach the necessary agreements and sell them to the voters.  If that realisation has not yet reached the opposition politicians in each country, then it needs to, and fast.  Playing party politics with such economic fundamentals is incredibly dangerous.

The second reason is the reason why the euro was a good idea in the first place.  A common currency can create a better economic environment for governments, businesses and consumers, but maintaining that currency will not happen on its own.  It is not enough to proceed on the old, familiar basis of national currencies, pretending that nothing more profound has taken place than merely reprinting the banknotes.  No, membership of the euro is much more significant and far-reaching than that.

The reforms it requires, demanding order and sustainability in the public finances, requiring a realistic assessment of how much a country can afford to spend and how much it has to save, are desirable reforms in any case.  Membership of the euro offers a better economic future, but like all better economic futures, it needs work.  Can the countries and the people of Europe prepare for that future?