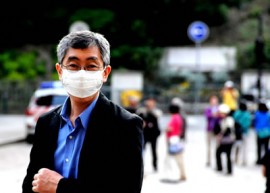 It has become apparent that the British government ordered many more shots of swine flu vaccine last winter than turned out to be needed. (The Guardian reports the story here.) The excess cost is not quoted but must run into tens of millions of pounds.

How come? How could the medical experts have got this one so wrong? There are two theories.

First, there is the notion that we were lucky. We bought the right amount of vaccine, given what was known at the time about swine flu, but it turned out that the worst fears did not materialise. Waves of pandemic flu have, in the past, been very serious indeed – more people died in the Spanish flu pandemic that followed the first world war than died in the war itself – and the possibility of a reoccurrence has to be resisted. As new communications routes open up between different parts of the world, people are going to be exposed to new diseases for which they have no immunity, which means that pandemics can be expected to become more rather than less likely in the future. We have to take precautions, and that means buying vaccines, but this time we were lucky.

The second theory is that the situation was never that serious. The vaccine shots do not come from nowhere: they are bought from pharmaceutical companies, who have an interest in encouraging fears about pandemic flu in order to boost their sales. The judgements about the seriousness of swine flu were made within the World Health Organisation, a number of whose medical advisers are alleged to have links with the pharmaceutical companies who make the vaccines. (It is a very specialised area, so where else are the experts to be found?) Paul Flynn speculates on this question here.

Right now, the grim truth is that we cannot be sure. The World Health Organisation does not have the normal mechanisms of accountability we would expect of a quango at national level. For example, the World Health Assembly is composed not of parliamentarians but of civil servants from the member states. These national officials will be prone to just the same influences and assumptions as the WHO officials they are supposed to control.

We need to recognise the WHO for what it is, namely an organ of government, and hold it to account in the proper manner. The fact that the WHO is international makes this more important, not less. That way, we might get to the truth about over-ordering.