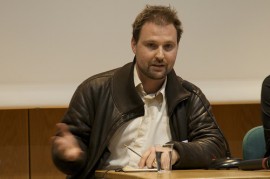 “It is time to give ourselves a reality check. To receive the wake-up call,” said Tony Blair after the No votes in France and the Netherlands. Sometimes, on a cold winter’s morning, it takes several attempts before you actually wake up, remarked Paul Hilder at a Fabian Society seminar yesterday.

Paul Hilder was introducing his new Fabian Society paper “Trumpets round the city walls” on the future of democracy in Europe. (The title is drawn from the subsequent sentence in the Blair quote above, which I have spared you.) He is angry about the complacency shown by the pro-European establishment since the referendums went wrong, and with characteristic energy and insight he suggests some ways of putting things right again.

At the heart of his paper is a knight’s move he has called a kernel of democracy: a knight’s move in that it goes forwards a bit, sideways a bit, and can jump over obstacles; a kernel in that it might be an alternative to a hard core. The democracy kernel is made up of three parts:
– open meetings of the European Council
– the right for national parliaments to send Commission proposals back for revision
– a citizens’ initiative right, i.e. a million signatures can launch a legislative proposal

The aim is to strengthen the political bonds between the institutions and the citizens and between the citizens themselves. If that can’t be achieved, then any future development of the EU probably isn’t possible, either. The short-term is necessary to lead to the long-term.

But what makes Paul Hilder’s work exciting is his unwillingness to settle for second best. Not only does he propose methods, he also suggests targets. Specifically, he wants to gather a million signatures to reform the CAP. Too much money is spent on large agribusinesses rather than more deserving causes. A citizens’ initiative of this kind might not only lead to a better agricultural policy but also bring the voters of different member states together to deal with issues of shared political interest.

Denis MacShane MP, a respondent at the seminar, seemed a little wary of the idea. I got the impression that he had seen numerous policies and initiatives fail over the years and preferred to see things a little more low key. In Ireland, he said, a country with a modern, liberal and successful economy, there was still a stout defence of the CAP. Gisela Stuart MP, the other respondent, was a little more hopeful but not much.

I must confess that I am on Paul Hilder’s side on this. If Ireland still supports the old-style CAP, that is because the issue has not yet been raised there properly. The country that has exported Bono and Bob Geldof to the UK is in need of some of their attention itself. I am not expecting or even hoping for miracles, merely saying that the debate needs to be started.

You can read Paul Hilder’s paper on the Fabian Society website here. No, not can, must.