Who is a European citizen?

Home/Europe/Who is a European citizen?

Who is a European citizen? 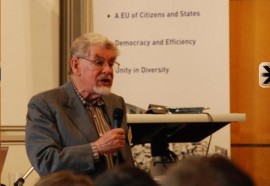 The American constitution, which is arguably the most frequently cited federalist model, asserts that “All persons born or naturalised in the United States and subject to the jurisdiction thereof are citizens of the United States and of the State wherein they reside.” (1) In comparison. European Union citizenship, first established by the Maastricht Treaty [1992], is hedged around by limitations and reservations. Nevertheless, taken together with other measures such as the abolition of internal borders within the Schengen area, it has proved to be of considerable benefit.

Yet while Maastricht defined the legal parameters of EU citizenship, certain broader issues still await a solution. Among them are the need to foster a sense of pride in belonging to the European Union, to increase citizen participation, and to find ways of extending citizenship rights to long-term residents from non-EU countries.

Every national of a Member State is also a citizen of the Union and therefore entitled to the rights conferred by the EU Treaty and subject to the duties it imposes. These rights include, the freedom within the agreed law to travel, settle, take a job or set up a business anywhere within the EU. Naturally, each Member State has its own internal regulations which must be respected. The European Commission has published country-by-country fact sheets on these details which are available on its website www.europa.eu.int/citizens

When resident in another Member State an EU citizen may also vote and stand as a candidate in municipal and European [but not national] parliamentary elections. Moreover, when living or travelling in a country outside the Union and where their own national state has no consular or diplomatic representation EU citizens may if necessary turn for help to the consular or diplomatic authorities of any other Member State.

Two further provisions are included in this Treaty Article (3) namely the right to petition the European Parliament or, in case of a grievance, to apply to the Ombudsman for help. Such rights are however also available to “any natural or legal person residing in or having its registered office in a Member State” and are therefore not exclusive to EU citizens.

For EU citizens rights to function effectively, particularly in relation to freedom of movement, seeking work or setting up a business, Member States have agreed to abolish all discrimination on the grounds of nationality or gender. Except in the public service it has been agreed that all EU citizens should be treated equally in respect of employment, remuneration and working conditions. (4) This, of course, has necessitated steps being taken to ensure mutual recognition of diplomas, certificates and other evidence of qualifications. Taken together, these agreements on EU citizenship rights and on the measures needed to put them into effect represent a revolutionary move away from the “self-sufficient” nation state and towards a more flexible, trans-border human society.

The Charter of Fundamental Rights

Concerned at the widespread misapprehension that the European Union was solely a market-orientated economic arrangement, the EU Heads of Government established a convention to draw up a Charter setting out the fundamental rights of the citizens. Its members were drawn from the European Parliament, national parliaments and representatives of Member States’ governments. The resulting Charter includes general rights as well as the specific rights linked to EU citizenship. The text was accepted by the Nice Summit in December, 2000, and eventually included in a slightly modified form in the Draft Treaty Establishing an EU Constitution agreed at the Dublin Summit, 2004, though its application was to be limited to acts by the European Union itself. Although, with the suspension of the ratification process, the legal status of the Charter of Fundamental Rights remains uncertain, the European Court of Justice has nevertheless been known to use its provisions as guidelines in certain of its judgments.

Who is a national?

At present, only nationals of Member States are EU citizens, and it is for each Member State itself to specify who its nationals may be. In the UK this has led to some anomalies. Under the British Nationality Act [1981] British nationals in international law are divided into several categories (5). Of these, only the first group — namely British citizens by birth or naturalisation — qualify for EU citizenship. Others such as Commonwealth citizens resident in the UK are excluded, although they have the right to vote or stand as a candidate in all UK internal elections. Theoretically one could even visualise a situation in which a Commonwealth citizen might represent the UK in the Council of Ministers and yet not be an EU citizen.

Across the EU are several million long-term, legal residents who are not nationals of a Member State and therefore not entitled to EU citizenship. These “3rd country nationals” make a valuable contribution to the economies, and often to the cultural life, of the countries in which they reside, yet they are excluded from EU citizenship rights. Some become naturalised but this is not always possible, either for personal reasons such as family ties or the loss of inheritance rights in their country of origin (6), or because of restrictive naturalisation laws in the countries where they live.

Certain pressure groups, arguing that EU citizenship is an entitlement to rights and not a nationality, propose that it should be made possible to acquire these rights without going along the naturalisation route. During the Constitutional Convention’s debates, for example, an amendment was tabled to the effect that “Any person. . . . who has been legally resident within the territory of the European Union for a period of five years shall be a citizen of the European Union.” (7) But this was not carried. Nevertheless, the question remains on the agenda. The Tampere summit’s conclusions, for example, contain the statement “A person who has resided legally in a Member State for a period of time to be determined, and who holds a long-tern residence permit, should be granted in that Member State a set of uniform rights which are as near as possible to those enjoyed by EU citizens.” (8) By so firmly making it a national rather than an EU competence, this side-steps the issue.

Since then, travel restrictions in the Schengen area have been very slightly eased for 3rd country nationals legally resident in an EU Member State but this move in no way matches the corresponding rights of EU citizens; nor, in the present political climate, is any further progress likely (9).

A citizen, according to the Oxford Shorter Dictionary, is “a person, native or naturalised, who has the privilege of voting for public offices and is entitled to protection in the exercise of private rights.” The holders of public office most obviously elected by the citizens are of course the members of the European Parliament. Their task is to represent the citizens’ interests in budgetary questions, in holding the Commission to account, and in legislation, particularly in those areas decided by co-decision between themselves and the Council of Ministers. They also have the power to give, or withhold, their assent to the candidate selected by the Council to be Commission President. But it must be noted that while the Parliament collectively reflects the will of the people as expressed in the European parliamentary elections the same is not true of the Commission whose members are de facto selected by Member States’ governments.

In drawing up draft legislation the Commission has usually consulted the industries and interest groups likely to be affected, as well as the Economic and Social Council. and the Committee of the Regions. We are now also witnessing a growth in the importance of the voluntary sector, the so-called civil society-that multitude of citizens’ interest groups whose aim is to influence policy by bringing pressure to bear on governments, parliamentarians and the Commission. These represent the citizens’ best chance of helping to shape legislation and initiating action on the issues which concern them most.

Identifying with the Union

The Parliament and Commission in particular have become increasingly aware of the gap between citizens and the institutions set up to serve them. Europeans may carry EU-format passports, freely cross internal borders within the Schengen area from Calais to Brindisi, using a unified currency to buy food and petrol, and yet only too often they still view the European Union with distrust blaming “Brussels” for all ills. This attitude is symptomatic of the failure of politicians, the press and electronic media, and indeed of the institutions themselves to emphasize the true nature of our multi-level government. At the beginning, the purpose was to bring about a closer union between peoples by means of economic integration. Today the emphasis must equally be on the need to involve citizens in the debate.

James Joyce wrote in one of his letters that “Our civilisation is an immense woven fabric in which very different elements are mixed.” The combined experience of background, faith, and genetic characteristics make up each person’s identity and also contribute to the identity of the society in which he or she lives. The European Union’s underlying philosophy is to establish in a framework within which these different individual identities can co-exist peacefully, in mutual respect and without discrimination based on sex, racial or ethnic origin, religion or philosophy, disability. age or sexual orientation (10).

The European vision is not, therefore, the creation of a new country called Europe. On the contrary, the aim is to develop a different political and social structure from any we have known in the past: a multi-layered. multi-national, multi-regional and multi-cultural democracy organised on federal principles and based on the acceptance of diversity between people and cultures. For the EU to function properly, citizens and their organisations will need to maintain a constant watch on what is being done in their name. This is the true meaning of a citizen’s Europe. It is not simply a matter of rights, but also of participation in order to ensure that all actions and policy decisions are undertaken for our mutual benefit and in accordance with the highest principles.

Read the article as a pdf file at EU citizenship

John Parry has written numerous articles on the politics of European integration. He is Honorary Vice-President of the Union of European Federalists. May 2006.