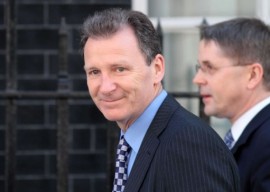 Who needs Wikileaks when we’ve got Sir Gus O’Donnell?  His report into the background to the decision to release Lockerbie bomber Abdelbaset Ali al-Megrahi from prison on compassionate grounds in August 2009 was published on 7 February and tells an interesting story.

The UK government had negotiated a prisoner transfer agreement (PTA) with Libya, so that nationals of one country sentenced to prison in the other could serve their sentence in their home country.  Such PTAs are common between friendly countries: the UK wanted to establish a friendly relationship with Libya because, we suspected, there were oil contracts up for grabs, and the Libyans wanted a PTA with the UK because they wanted to bring Mr Megrahi back home.  Before his conviction on 31 January 2001, he had been an official in the Libyan government and had been offered up for trial as an earlier part of the rapprochement between Libya and the UK and the government there must have felt some kind of responsibility for the fact that he was now in jail.

UK and Libyan motivations may have been different, but they came together neatly over the PTA.

The difficulty for the UK government in agreeing this PTA was that Mr Megrahi was imprisoned in Scotland, which has its own devolved system of criminal justice.  It was therefore necessary to get the agreement of the Scottish government as well, and, given that the Scottish government was in the hands of nationalist opponents of Labour, this was an opportunity to bargain.  Concessions were made to Edinburgh by London in order to get the deal that London wanted.  This kind of bargaining between different levels of government is characteristic of a federal system, where neither side has the power to instruct or compel the other.  Maybe it’s unseemly, but that’s politics.

However, the actual release of Mr Megrahi was conducted not under the UK-Libya PTA but on compassionate grounds, after a diagnosis that he was terminally ill with three months left to live.  Under Scottish law, a life sentence can be considered completed in such circumstances.  The decision to do so rests with the Scottish minister for justice.

When the possibility of such a release became known, the UK government alerted the Libyans to the fact and coached them on how to raise the issue with the authorities in Scotland.  According to Sir Gus, there was a clear policy that the government “should do all it could, while respecting devolved competences, to facilitate an appeal by the Libyans to the Scottish government for Mr Megrahi’s transfer under the PTA (Prisoner Transfer Agreement) or release on compassionate grounds”.  The government had an “underlying desire to see Mr Megrahi released before he died”.

The decision itself was taken by the relevant Scottish minister, Kenny MacAskill, and there is no suggestion that his decision was influenced by the state of UK-Libyan relations but rather was based on the medical evidence alone.  (There is some controversy about that medical evidence, but that is not part of our story.)  Crucially, his decision was not influenced by the views of the UK government in London – the boundaries implicit in a federal system were observed by both parties.  It is one thing to haggle over legislation and budgetary matters, but quite another to bargain over quasi-judicial matters, and this was understood by both sides.

It will surely be a feature of the post-Wikileaks world that governments’ foreign policies are subject to increasing transparency and scrutiny along the same lines as their domestic policies.  Do their values, their statements and their actions correspond?  Sometimes it takes a whistleblower to reveal all; this time it was the head of the civil service.  The lesson for all governments is that their foreign policies can and should rely less on secrecy and dissembling and will therefore have to be more consistent with their public positions.